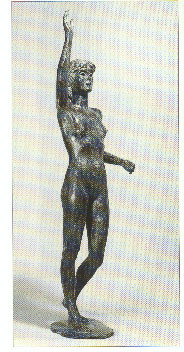 "The Highjumper", a bronze sculpture by Arno Breker, for which Ulrike Meyfarth stood model.

In the history of the modern Olympic Games, it is very unusual for a female athlete to win two gold medals in the same event within a twelve-year time span. However, Ulrike Meyfarth has accomplished this feat: she won the gold medal in the high jump in 1972 in Munich and now in 1984 she has done it once again in Los Angeles.

The composition of this sculpture can be compared to that of one of Breker's earlier works, a work which also has an Olympic motif: DIE SIEGERIN ("The Winner"; 1936). The intervening decades clearly show some changes. The athletically trained female body is completely different. The javelin-thrower of 1936 is stocky, while Meyfarth the highjumper is slim and her height and posture are in accordance with her physique. The gestures of "The Winner" are tentative, and together with the restful position of the legs (one supporting the weight of the body, the other relaxed), they make this sculpture a self-contained one. The sculpture of Ulrike Meyfarth--one arm raised, mouth slightly open, and legs positioned as if about to begin her run toward the highjump--has an outward focus, towards the observer. Her gesture of greeting is an attempt to relate to her audience, not in an insistent way, but simply flowing from self-confidence in her own abilities.

Bayreuth, the city of Richard Wagner, selected this figure and donated it as the prize to be awarded to either a male or female athlete from Bayreuth as "Athlete of the Year." The winning athlete will receive a copy of this sculpture, about 30 cm in height. This is the second athletic award for which Arno Breker has done a sculpture, the first being the challenge trophy with the motif of a runner, which was donated by the president of the administrative district of Düsseldorf in 1926.

Translated from the German by Lynne Nibbelink.