The Light on Hatha Yoga 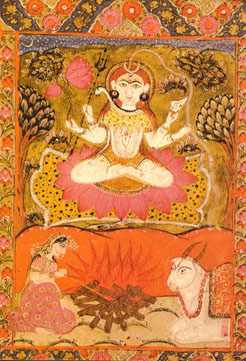 Traditionally, the god Shiva is regarded as the original founder of Yoga.

"In ancient times hatha yoga was practiced for many years as a preparation for higher states of consciousness. Now, however, the real purpose of this great science is being altogether forgotten. The hatha yoga practices which were designed by the rishis and sages of old, for the evolution of mankind, are now being understood and utilized in a very limited sense. Often we hear people say, 'Oh, I don't practice meditation, I only practice physical yoga, hatha yoga.' Now the time has come to correct this view point. Hatha yoga is a very important science for man today."

"The main objective of hatha yoga is to create an absolute balance of the interacting activities and processes of the physical body, mind and energy. When this balance is created, the impulses generated give a call of awakening to the central force (sushumna nadi) which is responsible for the evolution of human consciousness. If hatha yoga is not used for this purpose, its true objective is lost."

'Hatha Yoga Pradipika' is the fundamental ancient text on hatha written with one goal in mind: that of the student reaching the state of Samadhi. It is an essential source for yoga teachers and serious students of the science and philosophy of yoga. There are many important technical areas discussed in the Pradipika: pranayama, shatkarma, mudra, bandha, meditation, laya yoga, nada yoga, kundalini yoga, and yoga nidra.

The commentator, Swami Muktibodhananda Saraswati, has not only practiced these techniques, but she is also well versed in both traditional and scientific aspects of yoga. Born in Melbourne, Australia, she had always been drawn to yogic disciplines and ashram life. At the age of seventeen she traveled to India to study with her Guru, Swami Satyananda Saraswati. He was the author of over 80 books, and founded many yoga movements including the International Yoga Fellowship Movement in 1962, the Bihar School of Yoga in 1964, and the Yoga Research Foundation in 1984. Due to her experiences she is able to present to us little known traditional benefits of yoga and also explains its positive effects in the appropriate endocrine, neuronal, and psychophysiological terminology.

In addition to discussing the basic postures there are sutras describing unique practices such as kechari mudra (tongue lock), dhauti (internal cleansing), nauli (abdominal massaging), and amaroli mudra (intake of amari). The commentary also includes many elements of yoga psychology and the principles and ideals necessary for greater intensity and success of one's sadhana. 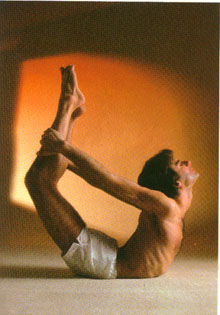 "OM is a bow, the arrow is the Soul, Brahman is the arrow's goal".

He is adored by the cicle of yoginis and becomes the controller of creation and dissolution, being without hunger, thirst, sleep and laziness.

"What is the chakra of yoginis? Chakra usually refers to a particular circle which is a source of energy. Yogini is a female yogi, the embodiment of shakti, the cosmic creative force.

The chakra of yoginis symbolizes every function of the gross and subtler bodies, the functions of mind and intergration with the soul. Our entire existence is controlled or operated by various forms of shakti or a specific yogini or devi. Each individual person is a manifestation of the chakra of yoginis.

Thus through the practice of seetkari the whole body comes under the control of the practitioner. In fact, perfection of any of the pranayamas leads to control of the body mechanisms, stabilization of the mental tendencies and deeper awareness of the mind/body complex." 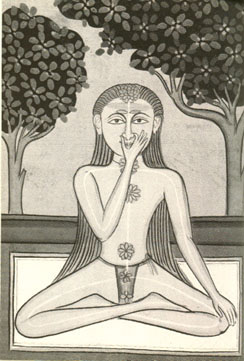 An ancient yogi practicing the 'alternate nostril breathing' -- one of fundamental techniques of 'pranayama'.

"The cessation of breath coincides with the cessation of mental activity. For most people this only happens at the time of death. Through practice of hatha and raja yoga the body and mind are trained to withstand this experience, so that potential life does not leave the body and awareness is maintained. Raja yoga is the result of total one-pointedness of mind, and this total one-pointedness can only be maintained when the body has been fully prepared…Hatha yoga is the process of uniting ha, the moon or ida and tha, the sun or pingala nadi, with sushumna in ajna chakra. Before the union takes place, there has to be purification of all the body elements, and for this to occur they must first be separated. The process also involves separation of the mind from matter, liberating the energy…In the 'Yoga Sutras of Patanjali' it says when consciousness (purusha) and matter/energy (prakriti) live together, there is perception, cognition, knowledge, action and creation. Separate them and that is Samadhi."

One hears the sound of the unstruck resonance (anahata shabda); the quintessence of that sound is the (supreme) object (consciousness). The mind becomes one with that object of knowledge and it dissolves therein. That is the supreme state of Vishnu (sthiti). 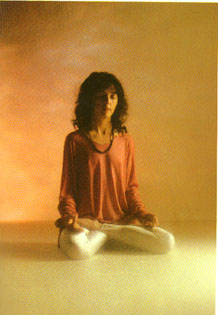 A modern student shown in meditation in one of the well-known sitting postures -- "Padmasana" -- the Lotus. The hands are in the gesture of 'jnana mudra', used during meditation to automatically activate the diaphragmatic breathing.

The main technique of yoga is that of laya, or dissolution of the subtle sheaths. This starts with the five active senses, the annamaya kosha, then the pranamaya and manomaya koshas (the breath and the mind). The practice of hatha works on all these sheaths to control the mind.

"The authors of the hatha yoga texts were very much aware of the difficulty of controlling the fluctuations of the mind…so they adopted another method. The hatha yoga texts state very clearly that by controlling the pranas, the mind is automatically controlled… when pranayama is practiced correctly, the mind is automatically conquered."

Thus the importance of the various hatha exercises is realized: that to control the mind and deepen the meditative experience, the grosser aspects of the body should be controlled. The 'Hatha Yoga Pradipika,' with this excellent commentary, may provide sadhakas with inspiration, understanding, or new techniques to deepen their practice. It will also provide a much greater understanding of the history of hatha, its many practices, and the relationship between hatha, meditation, and Samadhi. 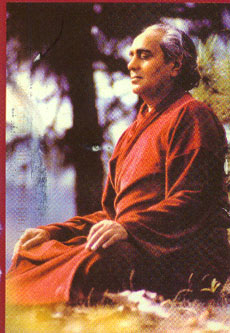 In the Lineage of the Himalayan Masters, the ancient and sacred teachings of yoga are passed on for thousands of years, in an unbroken lineage from an accomplished master to a deserving student. Swami Rama of the Himalayas, one of the greatest yogis of the 20th century in meditation.

'Hatha Yoga Pradipika' is recommended by Swami Veda Bharati ( a leading disciple of Swami Rama of the Himalayas) and excellently complements his book 'Philosophy of Hatha Yoga'. They can be purchased through www.amazon.com or Swamiji's book may be purchased at www.swamiveda.org/bookstore.htm