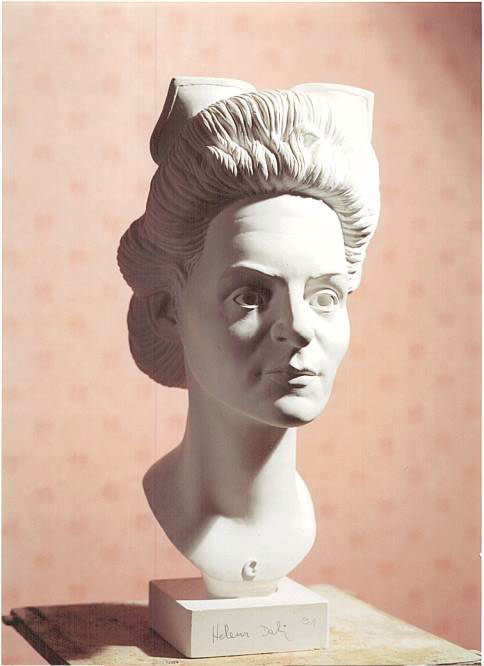 Paris. (bpb) Salvador Dali's wish has been finally fulfilled: a portrait-bust of Helena Dali, known as Gala. It was created by the European sculptor Mirko Donst (Berlin). The European Art Foundation (Europäische Kultur Stiftung) has now officially accepted it into their Royal Dali-Collection Paris. The story of this masterful work of art is so Daliesque as the life and work and of Salvador Dali himself.

As the sculptor Arno Breker was working on a portrait of Dali in his house in the Spanish Figueras in 1974/1975, Dali suggested to him to make also a bust "Divine Gala" of his wife Helena. There were two things to take into consideration: Dali wanted to surprise his Muse with this portrait. And Gala refused on principle to sit model for a bust, because of her advanced age. "She is like Marlene Dietrich, and cannot get over the fact that time has touched her", joked Dali in his conversation with Breker on the terrace of their house by the sea.

"Does she also hide the mirror, like Marlene in Paris?, asked Breker.

"No, not yet, but she darkens the room and she loves candlelight."

So, Dali showed him photographs, as well as paintings and drawings, which he had made earlier of Gala. Among them was a red chalk drawing, which the museum founder A. Reynolds Morse and his wife Eleanor Morse have in their Dali-Collection in USA: Gala with the face of a Madonna. Breker, who observed Gala during their meetings, in the end was not able to create the work, due to the many other projects. The joint project finally fell asleep in the archives.

Gala in her full beauty with a CHANNELL scarf

Finally, the European Art Foundation took the initiative, and so Dali's wish for a bust will become a reality. The curator of the Salvador Dali Archives, Detlef Lehmann made available portrait photos of Helena Gala Dali from the various periods of her life. From them, Donst, as a highly talented specialist for portraits, was able to bring to life the likeness of Gala. He did this according to Dali's vision: Gala-Divina-The Divine Gala.

"I have portrayed Gala in the way, in which the totality of the many facets of expressions of her faces had on me", explained Donst his about work. He saw a princess, a Russian princess, maybe even an empress.

The charming, revengeful, stubborn and domineering aspects are all present in the portrait-bust, as well as power and intrigue.

"From the beginning it was clear to me that the positive qualities must overshadow the others in the portrait", said Donst. "Gala was not only married to a genius, she also had genius in her." The sculptor gave special expression to certain elements: the magnificence of Gala's hair and the black CHANNELL-scarf, which Gala used to wear like a crown. Also Dali has immortalized her in this way in his paintings.

The Dali curator Detlef Lehmann noted the similarities of the portrait of Gala with the face of Marlene Dietrich. This applied "expecially to the cheekbones". Differences are in the form of the nose. While Dietrich had more of a erotically bold nose, the elongated nose bridge of Gala symbolically signalled: "I am cool and way ahead of you".

The director of the US Museum of European Art, Consul B. John Zavrel, called the bust a "magnificent work of timeless beauty and harmony". Gala Dali was one of the most unusual and best known women of the 20th century. "The history of this work, authorized by Dali, allows us to speak of it as the only authentic portait of Gala. It is an important document of art history."