MANKIND'S TECHNOLOGICAL TASKS FOR THE FUTURE

Member of the Alexander Order 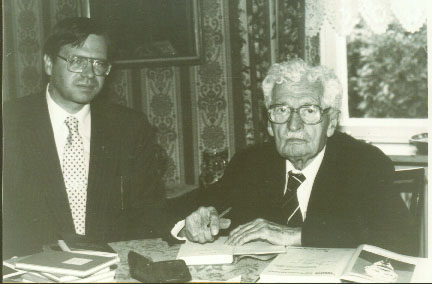 John Zavrel, Chacellor of the Order of Alexander the Great, with Professor Hermann Oberth in Feucht, Germany.

The coming decades will be dramatic enough for humanity even without atomic wars or other military confrontations. Dangers such as overpopulation, destruction of the environment, a decreasing supply of raw materials, educational and intellectual deficiencies in a large part of the population, dangers such as these are gradually becoming apparent to the average European, American, and Asian and are forcing the governments to exercise foresight, to be responsible, and to deal with more problems than ever before.

In order to gain time against the greatest danger, namely overpopulation by people who are incapable of culture, it is urgent that we take in hand the following technological projects.

I have already discussed a few of these in my writings, "Ways to Space Travel", "The Space Reflector", and "The Kite Power Station" (a wind-driven power station at high altitudes).

Producing electricity by utilizing such natural sources as waves, tides, and the sun is what I consider to be our most urgent task in the coming years.

Many of the power stations driven by the waves at the mouth of the Amazon River would also cause the loam which is floating in the water to settle, and land can thus be reclaimed. The same thing could also be done at the mouths of other large rivers.

Water is our most valuable raw material. It should be employed to better advantage than it has been up to now.

For instance, central Asia could be irrigated by closing off the northern part of the Caspian Sea with a dam and directing the waters of the Volga to central Asia. An additional possibility for irrigating central Asia could be achieved if the waters of the Danube, the Dniester, the Dnieper, and the Don Rivers were combined after damming off the northern part of the Black Sea. This water should then be directed by a canal into the Sea of Azov and then into the Caspian Sea by way of the Manych Depression. If this were done, lakes and forests would be created in central Asia which would improve the climate (mild winters and early spring) there as well as Europe.

Even Saudi Arabia and Iran could be irrigated, if the Persian Gulf were sealed off at the Strait of Hormuz and the water of the Shatt-el-Arab used. Of course, sea water from the Persian Gulf would also have to be drawn out and desalted.

Too much water from the Mississippi and the Nile still flows into the sea.

In Australia, too, water which flows into the ocean would be redirected inland by creating man-made valleys.

The sheets of ice over the Antarctic could likewise be thickened in order to create a reservoir. A 200-kilometer-wide cooling strip could be built up around the land mass. In the glaciers, shafts might be drilled down to the earth's surface; in these shafts cooling liquid circulates which is cooled down from the top and then cools the earth and prevents the glacier from moving. In doing this care is to be taken that the coolant does not enter the ice mass or sea. The earth will not be driven off its axis or crack as a result of this; only the Platonic year will be a bit longer. Around the North Pole, too, an enclosure of 1000 to 2000 kilometers in diameter could be built. The walls should reach 4000 meters above sea level. Inside, the water will freeze all the way down to the earth's surface. Later the enclosure will be filled up to the brim with ice and snow. Through these efforts the sea level will drop several meters, and the land will reclaim what the sea once took from it.

All these measures would increase the salt content of the oceans, and they would have to be desalted to the point where they are today. Then, too, the plan of the "King of the Sahara," as de Lesseps, the son of the architect of the Suez Canal, called himself, could be realized. Already at the close of the previous century this man suggested redirecting sea water by means of a canal to the part of the Sahara which lies below sea level.

Additional reservoirs could be created by subterranean water reservoirs, which could be sealed up with deep-sea clay.

D. Reports of the Uranics

In one of his last communications, my medium wrote: "Even in technology we are more advanced than you are. We could teach you a great deal in this area, and you would be attentive pupils, but we do not want to make you stronger in an area where you are already strong enough. Your culture is comparable to a ship whose cargo has all been placed on one side and is keeling over. Technology is masculine wisdom; what you are lacking is feminine wisdom. The masculine mind holds sway over the principle of destruction; the feminine, over construction. One should only destroy where something better can be built instead. Furthermore, however, it is also God's will that you be permitted to solve your own problems, so that you will gain experience and become stronger in the struggle for survival and in your battle against the powers of evil. Most of this can only be learned through experience. You must also withstand personal misfortune and suffering and do your own discovering and inventing. We can only make suggestions as to where and how your strengths should best be used and what your goals should be instead of dissipating your energies in petty national jealousies and ideological battles. Dispense with nuclear power plants. You should continue atomic research, for God wants you to enjoy learning and discovering new things. But in addition build space stations at the 60-degree libration points between the Earth and the Moon. Such research work belongs in space, not on a flourishing planet. The danger is greater than you think. You have the capability to make the earth uninhabitable for human beings. To us it would make no difference. We know of creatures who live in a climate like the one you are about to create on earth. We would resettle them on earth if you annihilate yourselves and your fellow creatures. But it would be a shame to lose you and waste the efforts which your God expended on you and His Creation. Disarm yourselves and guard against bellwethers who run into burning stalls out of fear; and do not be like the hare who, afraid of the beater, exposes himself to the hunter's gun!

Learn birth control! Whoever prevents his God from erasing strokes from the living picture which he has drawn, must blot them out himself and bear the blame for the damages if he makes a mistake. Beware of the great seducer: Nobody can speak as pleasingly and piously as he. He has often been mistaken for God and God for him. But El-Elion* is inexorable: It is a natural law!


*El-Elion is the law which governs the development of chaos into cosmic order.

An excerpt from the book "Primer For Those Who Would Govern" by Prof. Hermann Oberth.