"The Voice of Germany" has many voices

More than 3,000 German newspapers abroad--Jewish newspaper in the United States is the "flag ship" of the German press abroad 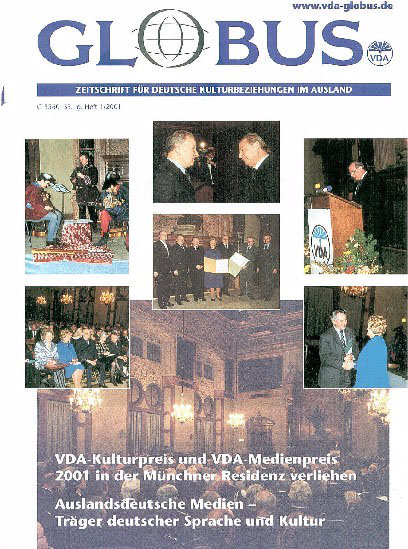 New York / Bonn (bpb) Millions of people on all the continents, German citizens as well as German speaking persons, are interested in information about Germany. "The Voice of Germany has at this many voices", said the chairman of the Society for German Culture Abroad (VDA), the Christian-democratic member of Parliament Hartmut Koschyk, in an interview with Prometheus. Important are the independent German publications in the various countries. But the German press abroad stands on its own feet. It does not receive any state funding.

Koschyk appealed to the publishing houses in Germany to enter into sponsorships with German newspapers abroad. German publishers should above all provide "technical help" with the modern equipment. "In that way one could achieve a big cultural contribution", said the chairman of VDA. His organization, rich in tradition, supports more than any other the dialog with Germans abroad.

Like the VDA, also the "International Media Help" (IMH) in Bonn strengthened the importance of these newspapers and radio stations which are independent of state offices. They are priceless for the purpose of spreading of the German culture and traditions. They focus above all on business people and tourists, members of the German minority as well as students of the language on all the continents.

Positive development after the East-West conflict

The number of German language newspapers and publications abroad has risen since the end of the East-West confrontation to over 3,000, as well as to about 400 radio programs in the year 2001. A "flag ship" among them is the German-Jewish newspaper "Aufbau" in New York, as the Society for German Culture Abroad in Bonn explained. Its chairman Hartmut Koschyk asked German publishers to support above all the small newspapers in East Europe. There is still much need for better basic equipment and set-up. And for that, also technical equipment like used personal computers and printers are very helpful.

An informative publication for schools, societies, embassies and multiplicators abroad is the newspaper "GLOBUS" of the VDA. (http://www.vda-globus.de)

According to a recent research of the newspaper "Globus", besides the Jewish publication "Aufbau", the newspaper "Amerika-Woche" is the most important national newspaper in the United States. It is led by the 35-year old journalist in Chicago, Mario Schiefelbein. He studied in Hannover. Before his appointment in the United States he was an editor in Germany. Then, according to the "Globus" report, comes another important publication, the North American "Wochen-Post".

Before, there were 525 German newspapers in the United States

Although in 1860 there were 525 German daily and weekly newspapers, there remained only eight large papers on the market in 2001, explains the VDA statistician Hans Frick. But there is a growing demand for German media in the lands of the former Easter Europe, where the German minorities have been oppressed for decades. Among them were the former Soviet republics, Poland, Czech Republic, Romania and Yugoslavia.

To the striving publications belong the "Baltische Rundschau" in Latvia and the "St. Petersburgische Zeitung" in St. Petersburg in Russia, said Frick These newspapers have been re-opened in 1991, after 70 years of political prohibition.

The VDA supports the engagement of German newspapers abroad and the accomplishments of their publishers and co-workers with the annual cultural and media award. In 2001, these awards went to the Slovak Republic and to the weekly newspaper "Brasil Post" in Sao Paolo.