The Dalai Lama on Happiness and Transience

His book "Ethics for the New Millennium" 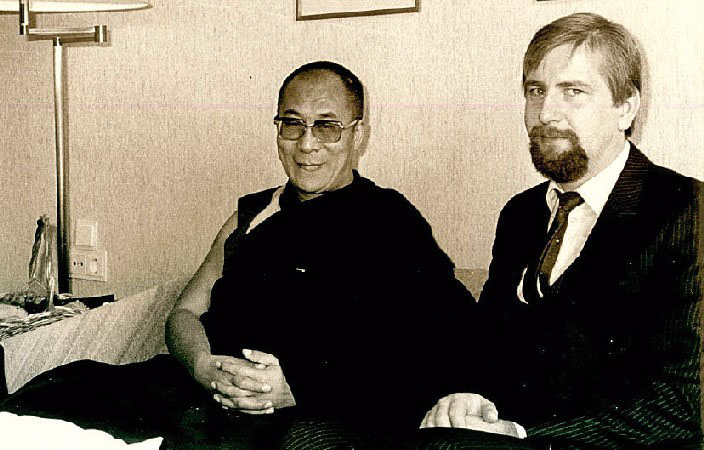 H. H. the Dalai Lama with the German art historian Dr. Volker G. Probst. The Buddhist leader appreciates Western people who take interest in the culture and history of Tibet. The dialog of the Dalai Lama with other religions and with Pope John Paul II led caused politicians to pay more attention to the Tibet questions. In the United States, His Holiness met with President Bill Clinton in the White House. Prominent artists like Richard Gere support the engagement for a free Tibet.

New York/Berlin (mp) Again and again, the Dalai Lama, as the most popular representative of Buddhism in the world and the recipient of Nobel Peace Prize, has spoken on the fundamental questions of happiness and transience. To this belongs his writing "Das Buch des Menschlichkeit", which has just been published in Germany by the Lübbe-Verlag. The English version carries the title "Ethics for the New Millennium". It was published by Riverhead Books (a member of Penguin Putnam Inc.) in New York.

"Renounce envy and the need to triumph over others. Instead try to do them good. Welcome others with a smile--full of friendship, full of courage and with the knowledge that this is the only way you can win. Be honest and try not to be prejudiced. Treat every man as if he were a good friend.

I do not say this either as the Dalai Lama, nor as a someone who has special powers or abilities. I do not possess any such things. I say it as a man: as one, who just like you, prefers to be happy and does not like to suffer pain. And if, for whatever reasons, you are not in a position to help others, then at least do not do them any harm, do not increase their suffering."

The Prayer of His Holiness

At the end I would like to say a small prayer with you, one which has always been very helpful in my efforts to help others:

May I now and always be this way:

A Protector for those, whom nobody protects,

A Guide for those, who are lost,

A Ship for those, who must go across the seas,

A Bridge for those, who must cross rivers,

A Refuge for those, who are in danger,

A Lamp for those, who have no light,

A Shelter for those, who are without protection,

and a Servant for all those, who need help.