Film by Dagmar Wittmers and the art of packaging

A document on Breker with thrilling camera work too much editing 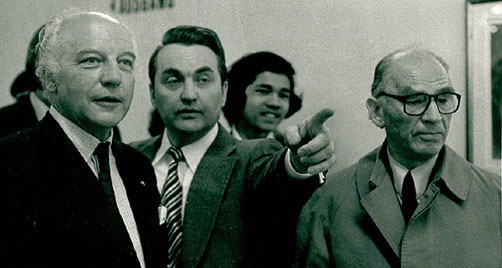 The German President Walter Scheel (left) visits with Arno Breker (rechts) a Breker exhibition in Köln. Breker's work after 1948 in France, Africa and Germany as well as the international significance of the sculptor are too understated in the film by Dagmar Wittmers.

Berlin/Stuttgart: The documentary film "Arno Breker--German Lifetimes" is already at the beginning exciting like a thriller: secretive divers are bringing up from a lake unusual figures: witnesses of the past and of a downfall on 1945. Hermann Göring let art treasures be sunk in a lake, to save them from the approaching Russians. Shortly before the end of DDR (East Germany), these bronze sculptures were brought up.

The Berlin film director had these photos tracked down. She has used the pictures in the introduction to a documentary film of the Saarland TV, which puts under the magnifying glass a contraversial, yet the most significant sculptor of the 20th century: Arno Breker. The 60-minute long TV film is an example that one can effectively package together history and art.

Dagmar Wittmers has, through her extensive research, brought up much what had been forgotten to the light of day. The strong-willed film director, who was educated in the DDR, had to deal with much time pressure and limited budget. The result is therefore so much more impressive. According to the opinion of historians and experts, it deserves and award.

Wittmers keeps to the historical facts, that Breker was not only the "favorite sculptor" of Adolf Hitler, but also that he had achieved a high level prominence in the art society already before the NS times. Breker's engagement diring the NS dictatorship to help Jews in Germany and France, for the endangered publisher Peter Suhrkamp, for artists like Pablo Picasso, had their source in Breker's humanity and friendship.

It is courageous from the film director Wittmers, 57 years after the end of the NS times and eleven years after the death of Arno Breker (1900-1991) to venture to show more objectivity. And for this, the document gains on value. It makes it different from other, expensively made TV productions like those of the ZDF, in which the Nazi times are again and again marketed with Abschau and Empörung in the capitalistic society. The chief editor of the ZDF historical department Guido Knopp, announced for 2003 even a film about the Kessel of Stalingrad from the archives, which will be shown in ZDF, and with the approval of management marketed to others. And so the "Thousand Year Reich" of the dictator continues for the new generation.

When Germany's most popular TV talk-master Harald Schmidt joked recently about the ZDF documentations that also he was working in "Nazi TV", maybe he had reasons for his ironical criticism.

A shortfall of the film by Wittmers is that eyewitnesses were not used enough. So the words of the art historian Dominique Egret from Paris and the Jewish sculptor Ernst Fuchswere cut off, and the sculptor Kurt Arentz came short even more. The Jewish eyewitness Dina Vierny, who was Maillol's favorite model and who has to thank Arno Breker for her being released from prison during the NS occupation of Paris, was totally left out.

Wittmers gave more space to the Berlin art historian Dr. Josephine Galber, who tries to pass herself as an expert on Breker, but has never known him. With her colleague Dr. Ursel Berger from the Kolbe Museum and the curator Dr. Penelope Curtis from the Henry Moore Institute, she published contraversial texts in the catalog for the exhibition "Taking Positions". But what is positive is that the film "Arno Breker--German Lifetimes" allows the viewer to let the pictures make the impression on their own merit.

The film was broadcast so far by SWF, ORB and SFB1. The station 3Sat will show the documentary in 2003. The TV viewers of the Bavarian Broadcasting, WDR and NDR had so far no chance to see the film in their area. It would make sense to show the Breker documentary in ARD and in the German-French cultural chanel ARTE. After all, Breker is of French ancestry, and since his young years he has been a self-proclaimed European, like Jean Cocteau.