The life-work of an art-minded family with tradition 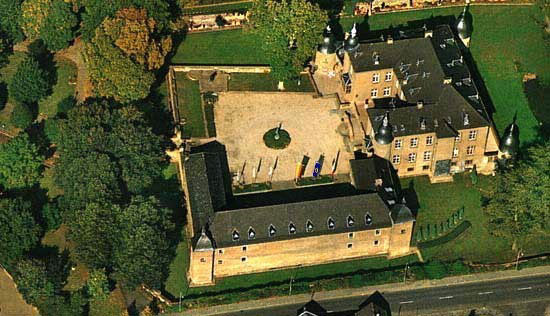 Aerial view of the Bodenstein Castle near Köln, Germany.

Köln/Nörvenich (bpb) It is a special place of art in Europe: the Bodenstein Castle in Nörvenich near Köln in Germany. In its origin, the historical complex goes back to the 12th century. The core of the building still visible today is more than 300 years old. In the eventful history of this region between the river Rhein and the old Imperial City of Aachen, it is thanks to the Bodenstein Family that this compex has been restored and used culturally after World War II. The Bodenstein Castle is among others the seat of the European Art Foundation for the Promotion of Art and Science ( www.europaeische-kultur-stiftung.org )

Especially it is to be emphasized that the renovation and the preservation of the Castle complex has been brought about exclusively by the House of Bodenstein. The Castle is built, in accordance with the building tradition of the region, from red bricks sandstone. The history of the building reflects the development of what was originally a Roman settlement, until today as a building used as a cultural center.

2,000 years ago, the small town that today has more than 10,000 inhabitants, was located on a military road. It connected the city of Köln, built by the Romans, with what is today the town Zülpich. At the castle complex, according to knowledge of the local history, were located Roman guard posts. However, the village and the whole region had already been settled by the Germans and the Celts. The castle was originally constructed with towers like a fortress, surrounded by a moat.

In the struggle for worldly and church power, the ownership belonged by turns to the Church as well as to noble families, like the Lords of Gymnich. At the end of the war in 1945, the castle was turned into a hospital for those who were wounded in the fight in Hürtgenwald (Düren) against the occupation powers.

In 1970, it was intended to use the Castle as a guest-house of the West German government, which was established after 1945 by the German Chancellor Konrad Adenauer in Bonn on the river Rhine. Finally, in 1980 the Family Bodenstein took over the complex and gave it its name. The Bodenstein Family comes from the Catholic, aristocratic family of Pottenstein from the town of the same name in Franconia, in the vicinity of the city of Bayreuth in today's Bavaria. The Pottenstein-Bodensteins were connected by family ties with Saint Elisabeth von Thüringen (1207-1231). Back then, on her way from Hungary to Thüringia, the very young Elisabeth spent the night at the Pottenstein Castle. With the charitable Elisabeth is associated the "Miracle of the Roses", which is represented in the picture. 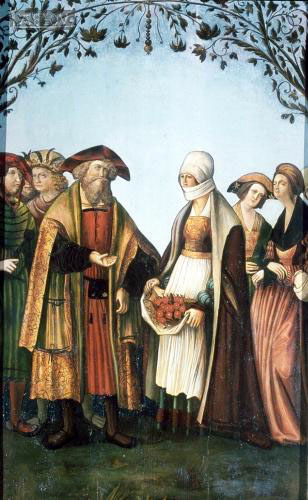 This picture, from the first half of the 16th century, depicts the "Miracle of the Roses" of Saint Elisabeth von Thüringen.

She is caught red-handed by her tight-fisted husband, the Count von Thüringen, just as she, at a time of a great famine, was about to distribute food to the poor. But as her husband demands to see the things she had hidden in her apron, they have turned into roses.

Also the members of the family von Pottenstein-Bodenstein act in this tradition work. Thus, in 1980 Marie-Louise Bodenstein, born Setzer from Strojeditz, and her son Josef-Franz Bodenstein made the family estate available for public use for cultural purposes. Both sons, John Gilbert Bodenstein (Lord of Nörvenich Castle) and Marco Bodenstein continue this engagement.

So, the castle, which slept like the "Sleeping Beauty" after the war, with the times of decay, was brought back again to social and cultural life, with guests from politics, arts, culture, business and society. To the friends and guests belonged among others Dr. Mildred Scheel, the wife of the former German President and the founder of the German Cancer Society, the French writer Roger Peyrefitte, the arist Henry Moore, Leonor Fini, Paul Belmondo, Ernst Fuchs, Friedensreich Hundertwasser, Kurt Arentz, Mirko Donst, Hugo Haig-Thomas as well as the heir to the Spanish throne--Felipe, the Prince of Asturias.

The most prominent guest in the early time was no doubt the Emperor Charlemagne. On his march from Bonn to his imperial residence in Aachen, he stayed overnight on the castle grounds. The international European "Karls-Prize", which is awarded by the city of Aachen for merits for European unification, was named after him. Among the award recipients are among others President Bill Clinton, Sir Winston Churchill, Paul Henry Spaak, Robert Schuman, Konstantin Karamanlis (Greece), Sinmone Veil, the King Juan Carlos I. of Spain, Henry Kissinger, President Francois Mitterrand (France), German Chancellor Helmut Kohl, President Vaclav Havel (Czech Republic), Queen Beatrix of the Netherlands, and Tony Blair (England).