Wilhelm Tank on Art and Fashion

„What is really good, is always good and is whole in itself" 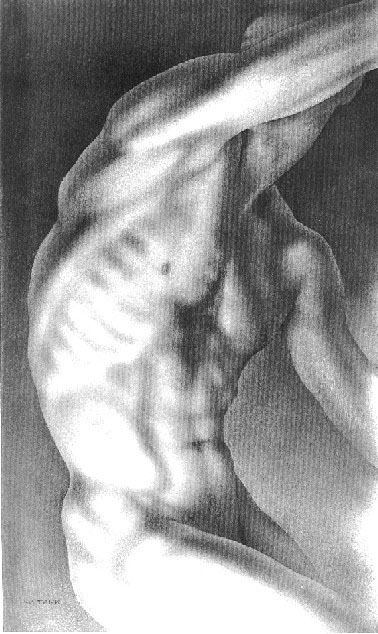 Wilhelm Tank: Drawing 'Young Athlete' from the series 'The Beauty of the Man'.

Berlin (bpb) Professor Wilhelm Tank was more than a leading anatomical painter of the 20th century. He was also a sculptor and philospher. In his thesis on "The Self-destruction of Civilization" Professor Tank writes:

„At the beginning was the 'Herald' who wanted to know the world, who wanted to protect himself from its dangers, who wanted to charm it, to master it. And in this way arose an artist, who gave a visual form to that which he or another came to know. At the formation of a culture, the artist felt himself to be a part of a whole, by which he was not only carried, but which also raised him up with his achievents.

The highest in the arts has never been achieved without the foundation of culture which commissioned the works of art. Thus, Michelangelo refused to create anything without a commission, as this would be unworthy of him. Indian temples, the works of the Egyptians or the Greeks, the pagodas and cathedrals with their paintings and sculptures are only possible as results of a common volition of all bearers of the culture, and even its most modest handiwork achievements show this high level of the whole. Thus art is not anything one-sided, nothing individual. It is not something only outside, not only inside, not only ornamental and not only transcendental, not only a copy and not only a symbol, not only good handiwork. It is not related only to Nature and not related only to the Tradition. It is all of them in one.

If an artist turns away from Nature, then his strength will leave him, like Antaeus lost his strength, when he let himself be lifted up from the mother Earth. In further sinking down, the totality will be neither aimed for nor achieved.

What is really good, is good at all times and is whole in itself. A modern art is "fashion". It has lost its worth, since it has lost its sense, because it replaces that which is always valid with that which is only temporary. The will to the self-affirmation of skill, of knowledge and of achievement must turn against the dictatorship of this disintegration 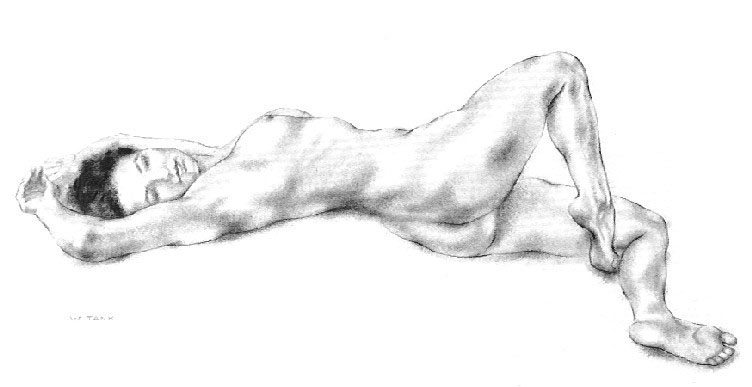 Wilhelm Tank: Original drawing from the series "The Beauty of the Woman"

NOTE: Antaeus was the son of Gaia and Poseidon. He was a frightful giant who compelled all strangers to wrestle with him and defeated and killed them all. He was invincible for as long as he remained in contact with his mother (the Earth), because she supplied him with strength. Heracles discovered his secret, and lifted Antaeus from the ground and strangled him. The battle with Heracles is depicted on many Greek vases and even on coin