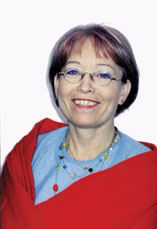 Berlin. (bpb) "Chinese medicine is not only acupuncture", says the expert on Traditional Chinese Medicine (TCM), Angela Koerfers. Also herbs play a great and equally legitimate role. The leading German therapist has been using from the beginning the Chinese herbal science for the treatment of patients, for whom the regular pharmacological products did not work. Koerfers belongs to the first men and women among the health professionals in Europe, who profitably use the ancient knowledge.

The friendly health practitioner with the bright eyes swears by the Chinese healing tradition, yet remains objective. She does not believe in magic and wonder healings. "But the knowledge of our ancestors, hundreds, even thousands of years old, is to be used in the age of space travel" more than ever before, she says. Satisfied patients call the therapist "Dr. Yin Yang". It is an expression for the fact that she combines seemingly contradictory practices in healing. The Yang is movement, the Yin is rest.

The victorious march of Traditional Chinese Medicine around the civilized West at the beginning of the 21st century has two reasons:

1) due to the opening up of China, it has become more possible for European and American health practitioners to personally study and learn these possibilities.

2) in industrial countries such as United States and Germany, the successful home remedies against illnesses have been forgotten. Herbs and natural products are mainly brought in from foreign countries like China and other Asian countries.

In the West, the natural product is no longer preferred, and vitamin tablets and chemical pills are being swallowed up in huge quantities. The often criticized "faith in pills" of doctors and also of the citizens has led to such a state of affairs, that pills with well-sounding names are taken with preferrence against various illnesses, even if these illnesses could be overcome by healthy eating habits and natural products. The home remedies, handed down from the grandparents, are hardly ever used any more. The "modern people" no longer grow healing herbs in their own gardens. And they do not bring home such things at all from trips to the fields and meadows.

Warning against charlatans and Chinese gangsters

Whereever there is success--like in the Traditional Chinese Medicine--there also can appear misuse. Here holds true: Not every man or woman who has an acupuncture doll in the display window, is guaranteed to have adequately mastered this generally helpful technique. Before taking treatments by these methods, every patient should get informed about the origin and education of the "doctor". Caution is better than blind trust. So, recently a prominent lady politician told me that after an acupuncture treatment she had day-long pains. She finally discovered the cause herself: the obviously absent-minded practitioner forgot to remove one of the acupuncture needles. (But this case has not happened in the practice of Mrs. Koerfers!) 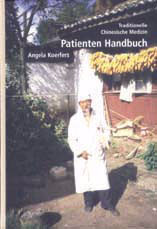 Title page of the book.

Nutrition according to the Yin Yang principle

The self-help handbook by Angela Koerfers about TMC is objective and understandable. It contains tips from fighting of asthma, impotency, allergies and menopause to social diseases. A chapter about "Everyday Eating and Health" reads like a fairy book . The realization is this: "A proper, balanced nutrition according to the principles of Yin and Yang (cooling and warming nutritional food) is important for a long life."

Koerfers writes: "For the Chinese, good nutrition and good health belonged together. One asked: Is he a cook, or a doctor?

Is this a drugstore, or a restaurant?

The science of nourishment is a important healing method in the TCM. Other factors present are acupuncture, science of herbs, Qi-Gong and massage.

In the book of the therapist Angela Koerfers there are also included the wisdom and experiences of her Chinese teacher, Professor Li. The German pharmacist Dr. Gerd Franken from Köln has reviewed the book before the publication for possible inconsistencies. This physician for internal medicine writes in his Foreword: "May this book help our so-called "school medicine" open up new horizons for the benefit of patients.