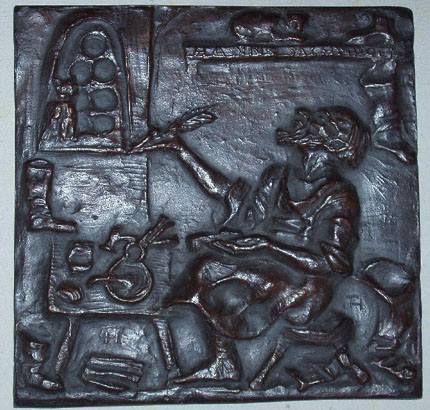 The sculptor Josef Thorak created this bas-relief to honor Hans Sachs. It shows the famous composer and writer at the time when he was only a simple shoemaker. The bas-relief in bronze was created by Thorak in 1949 in Austria. The fine art work (size 26x25 centimetres) is available for sale in a limited edition. Collectors can get more information at zavre@meaus.com and in Europe at marco-vg@gmx.de

Nürnberg/Berlin (bpb) Hans Sachs (1494-1576) is an extraordinary personality in European history. Originally, he was a shoemaker in Nürnberg, Germany. But eventually he become a famous composer and writer. In memory of this great talent, the sculptor Josef Thorak created a bas-relief in 1949. This artwork was just re-discovered, and is shown in this article.

In the 16th century, Nürnberg, 'the eye and ear of Germany', as Martin Luther called it, set the fashion for other towns, and was regarded as the classic home of the Carnival play. But from the days of Hans Sachs, who wrote his first piece at the age of 22 years in 1516, Nürnberg dramatists ranged far beyond the old farces. Sachs surpassed all his contemporaries in creativity and artistic power. It is said that he is the greatest poetical genius that had appeared in Germany since the Minnesingers. Although a Protestant, he had not the combative temperament of Hutten or a Manuel; his poetry was not inspired by indignation, and he retained his poetical composure in the midst of the troubled times in which he wrote. His power of easy creation had its source in the peacefulness of his nature.

Hans Sachs made use of all forms of literature in his efforts to spread information on various subjects. He became a real teacher of the people, and his teachings were of a comforting and conciliatory character, springing from his own kind and gentle nature. He is a master of description, and makes use of it on every possible occasion. He graphically depicts all the scenes which are within his power of imagination.

From Adam and Eve to the priest and his housekeeper

In one of his plays he depicts in a touching way the banishment of Adam and Eve from Paradise, and effectively enlists our sympathies for our first parents, whom this affliction only binds closer together. Especially charming is his description of Eve's naive fear of God, whose visits alarm her; and of Adam as a father, instructing his boys how to behave before the good God, how to take off their caps, to bow and to shake hands.

Frequently, he does not paint certain individuals, but typical figures, like the masks of the Italian comedy. In this, he was influenced by the German poetry of the day, the strength of which lay in satirical caricature. One or more of these typical figures regularly appear in every farce: the Catholic priest and his housekeeper, the cheating landlord, the wicked and quarrelsome old lady, the sharp-witted wandering scholar, the unfaithful wife, the jealous husband, and many others.

The literary activity of Sachs extended from 1514 to 1569. According to his own reckoning, he had by the year 1567 written 4,275 master songs, 208 dramas, 1,558 comic stories, fables, histories, figures, comparisons, allegories, dreams, visions, lamentations, controversial dialogues, psalms and religious songs, street and tavern songs, and a few prose dialogues--all in all, 6,048 pieces, large or small.

Hans Sachs died in 1576, in the 81st year of his life. Through his influence, the Nürnberg school of dramatic art became the example not only in the towns in the immediate neighbourhood, but also in Magdeburg, Augsburg, Breslau and Strasbourg. And even in the present day, relics of his dramas are found in the plays acted out by the German peasants of Bavaria, and as far as Hungary and Silesia. In those areas, they have survived as popular songs.

The world famous composer Richard Wagner (1813-1883) dedicated his opera "Die Meistersinger von Nürnberg" to Hans Sachs. This opera is regularly played at the international Wagner Music Festival in the city of Bayreuth near the German-Czech border. At the end of this opera, the choir of the people are singing: