Arnie Schwarzenegger as an object of Art 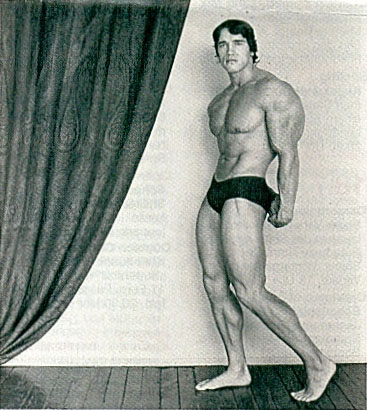 This charming guy is Arnold Schwarzenegger in 1976. The photograph of the bodybuilder by Robert Mapplethorpe is seen in an art-exhibition in the German Guggenheim Museum in Berlin.

Berlin/New York (bpb) Memories of the good old days with Arnold Schwarzenegger, now governor of California, in the German Guggenheim Museum at Berlin. In an exhibition honoring the US photographer Robert Mapplethorpe (1946-1989), the athlete Arnold Schwarzenegger is seen as an "object of Art".

Arnie was photographed in 1976 in his full young beauty. In those days, the European sculptor Arno Breker was asked by friends of Schwarzenegger to make a full-size sculpture of the sportsman. Unfortunately the commission was never realized, since both parties had problems making an appointment. Arno Breker died in 1991. Mapplethorpe died aged 42 on March 9, 1989 from complications arising from AIDS.

Mapplethorpe was born on November 4, 1946 in Floral Park on Long Island, New York. He produced a consistent body of work that strove for balance and perfection and established him in the top rank of twentieth-century artists. In 1987 he established the Robert Mapplethorpe Foundation to promote photography, support museums that exhibit photographic art, and to fund medical research and finance projects in the fight against HIV-related infection.

Mapplethorpe made most of his photographs Mapplethorpe in his studio. His most common themes were portraits of (now) famous people (including Andy Warhol, Deborah Harry, and Patti Smith) and nude studies. He is perhaps best remembered, however, for his series of closeup photographs of flowers. These highly polished and stylized photographs showed the plants' reproductive parts in extreme detail.Mapplethorpe's specialty was considering his photography equal to paintings, and so giving them quite exotic framing and printing.