The German Chancellor stands like a German oak tree 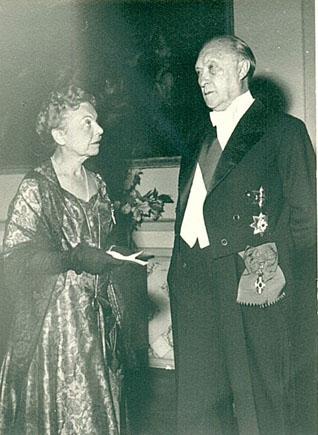 Berlin/Bonn (bpb) Konrad Adenauer, the former German Chancellor, who is the best-known German politician worldwide, had the talent to listen well and carefully to his colleagues. An example, which in the year 2004 sounds like a legend, has been preserved by his first Lady of Protocol, Erica Pappritz (source: the unpublished manuscript: "Recollections of a Protocol Lady--from Kaiser Reich over Weimar and Hitler to Adenauer".

At one of the first official receptions of the German Chancellor after 1948, the statesman who had experience with diplomatic service, tried to act "especially democratically" and go over to his guests during the reception. Seeing this, the Protocol Lady whispered in his ear: "A German Chancellor does not run around after his guests, he stands at his place like a German oak tree."

Adenauer was not offended by this frank advice of his Protocol Lady. Later on, he said in an interview about his opinion about women in government service: "Mrs. Pappritz, she was a good person: competent, loyal, dilligent and incorruptible."

As the new republic was beginning to learn the business of running the government, the influence of Mrs. Pappritz was really unusual. She has build up the state protocol under the Chancellor Adenauer. No one else would have been in the position to do this after the destruction of Hitler's Reich. Erica Pappritz looked back at her long career: She began is as a very young "grey mouse" in the Foreign Office during the time of the Kaiser, as she herself later described it. She lived through the Weimar Republic, and then survived in government service also the Third Reich. While she received the "call to come to Bonn", she was trying to scrape a living, like other officials of the former National Socialist leadership, in the American occupation zone in Bavaria. One day she received a call from Hans von Herwath, once a diplomat of Adolf Hitler. "Erica, get ready, we are going to Bonn", he instructed his former colleague from the Berlin Wilhelmstrasse.

"I did not have to think about it long", recalled Pappritz later. "We received a captured truck from the US occupation soldiers, and were on our way to Bonn."

What happened after that is history. Hans von Herwath became the first Chief of Protocol of the German Foreign Office. Erica Pappritz was the dynamic lady of the etiket, whose words ruled behind the scenes. Besides, she was the Grandmaster of the Alexander Order for Art and Science, and the most highly decorated German after 1945, who received government orders and decorations from all over the world.