His Holiness the Dalai Lama

The Dalai Lama, the exiled spiritual leader of Tibet, is now in Toronto for a 12-day visit, centered around the Kalachakra initiation and related Buddhist teachings.

In the evening of April 25, 2004, His Holiness will give a public talk on "The Power of Compassion" and answer questions at Sky-Dome. More than 22,000 tickets have been sold for the event.

During his visit to Toronto, the Dalai Lama will also receive an honorary degree from the University of Toronto, and meet with the Tibetan community.

But also the quest of the oppressed Tibetan people by the Chinese invaders was on people's mind. A teach of young Tibetans, including several monks, formed a cyclist team. Wearing lime-green FREE TIBET t-shirts, the group of 16 young cyclists rode about 600 miles from Washington, D.C. to Toronto.

The two-week "Peace Ride for Tibet" was organized by the "International Tibet Independence Movement" and its energetic President, Larry Gerstein, who has been involved with the movent since 1986. The ride ended on Saturday, April 24, 2004 in front of the Chinese Consulate in a mass demonstration for freedom for Tibet. The "Peace Ride for Tibet" was led by Jigme Norbu, son of the elder brother of the Dalai Lama, Thubten Jigme Norbu.

Prof. Thubten Jigme Norbu is now 83 years old. Formerly one of the highest lamas in Tibet, after escaping the Chinese communists he renounced being a monk and dedicated his life to fight &endash in a non-violent way -- for Tibet's freedom.

Then the group went on to the Munk Centre for International Studies at the University of Toronto, where a two-day conference on Canadian and Chinese relations was being held. There they loudly expressed their dismay that the conference, co-sponsored by the Canadian government, did not include representatives of groups critical of Chinese government policies.

Toronto's Mayor David Miller greeted the Dalai Lama with a white 'katak' &endash a ceremonial scarf &endash announcing that it was an honor to welcome His Holiness to Toronto. It is estimated that there are about 97,000 Buddhists living in the Toronto area, with eight established Tibetan centers. 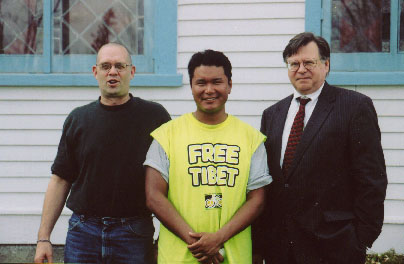 Larry Gerstein, President of the 'International Tibet Independence Movement' (left) with Jigme Norbu, son of the elder brother of HH the Dalai Lama, and Consul B. John Zavrel.

For more information about the Dalai Lama's visit in Toronto, go to

For information about the FREE TIBET movement, go to

For an fascinating interview with Thubten Jigme Norbu, the elder brother of the Dalai Lama, and a related article, go to

Tibet: Give us Liberty, by B. John Zavrel