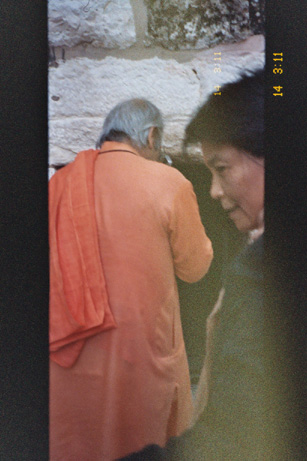 Swami Veda entering the birthplace of Jesus in Bethlehem at the Church of Nativity on December 14, 2003.

December 9 ...... Flight from Delhi to Mumbai to Amman, Jordan

Met with: Sefardic Chief Rabbi; Chief Rabbi of Israel; Anglican Bishop; Papal Nuncio; His Beatitude Greek Patriarch of Jerusalem and other dignitaries of the Greek Orthodox Church (including Bishop of Moscow); Prime Minister of Palestine; Conference with Palestinian academics (including the directory of El Aqsa Mosque &endash--"The Temple Mount") at Palestinian Academic Society for the Study of International Affairs; Advisors to the Prime Minister of Israel -- and so forth. A "Look-Listen-Learn" mission, with suggestions of non-violent solutions.

Bethlehem: the birth cave (manger) of Jesus in the Church of Nativity (an overwhelming experience); Church at the Village of the Shepherds 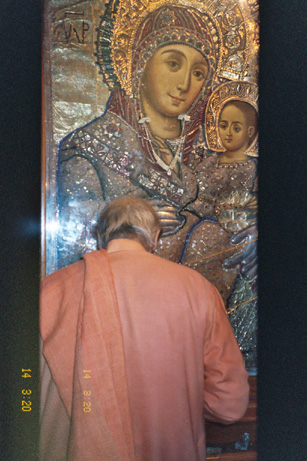 During the same time: datelines. Must write:

1. Proposals arising out of Israel-Palestine visit

3. A number of other proposals/booklets 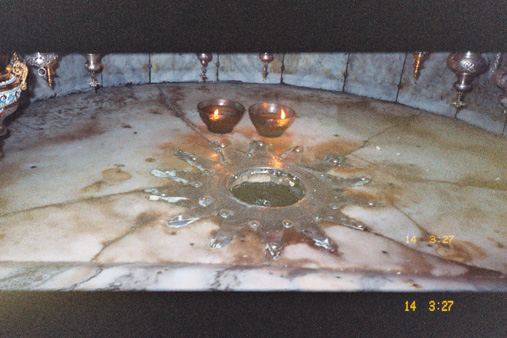 The birth cave of Jesus in Bethlehem.