The great singer loved the cowboy lifestyle and campfire romance 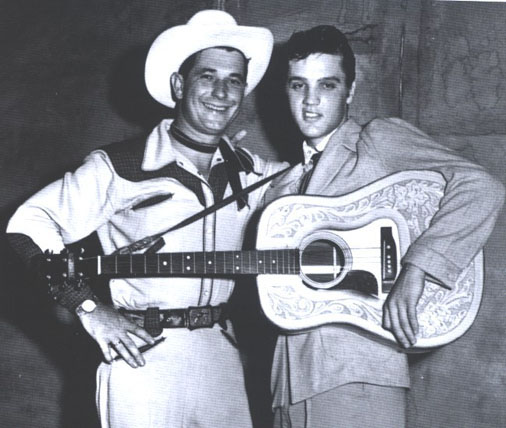 Backstage with Elvis. The cowboy Bill Strength visited the singer in 1955, backstage at the Overtone Park shell. Elvis Presley (then 20 years old) was "very charming and polite" and posed for the photographer with his young admirer.

New York (bpb) What has Elvis Presley to do with the top award-winning film "Brokeback Mountain"? This world-wide controversy started by the Hollywood movie about a cowboy love story in 1963 brings this to mind: the great entertainer Elvis Presley loved--as millions of other people--cowboy movies, the actor John Wayne and country music. He liked the authentic American cowboy: masculine, tough, independent, and stoic.

But Elvis loved a bit more of that. He felt himself again and again as being a cowboy. He liked their masculinity, as well the campfire romantism. But in the public, Elvis had to act most of the time as an ideal boy for girls, a kind of a superman for women. This is the image that his managers wanted. Anyhow: the fortunate Presley was well able to afford to buy his own ranch, where he could have his privacy and invite his friends, whenever he wanted and found free time.

What the movie tells us

Stephen Holden wrote in the New York Times about the gay film of Hollywood: The lonesome chill that seeps through Ang Lee's epic Western, "Brokeback Mountain", is bone deep as the movie's heartbreaking story of two cowboys who fall in love almost by accident. It is embedded in the craggy landscape where their idyll begins and ends. It creeps into the farthest corners of the wide-open spaces they share with coyotes, bears and herds of sheep, and rises like stifled cry into the big empty sky that stretches beyond the horizon….. One night, when their campfire dies, and the biting cold drives them to huddle together in a bedroll, a sudden spark between Ennis Del Mar (Hath Ledger) and Jack Twist (Jake Gyllenhaal) flares into an undying flame."

Both actors, who were not afraid to play these parts in this story written in the early 1960s, became very famous virtually overnight. Stephen Holden wrote in The New Yorker: "This moving and majestic film would be a landmark if only because it is the first Hollywood Movie to unmask the homoerotic strain in American culture." 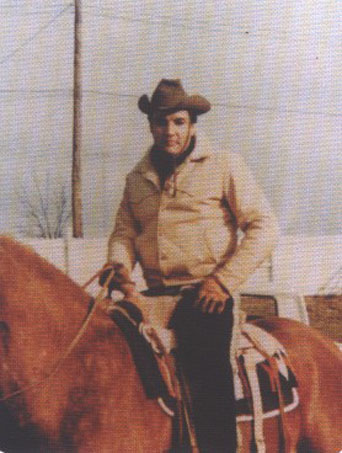 Elvis Presley as a cowboy. That was one of his secret dreams. This private photograph shows the star in 1966 on his ranch. He liked to be there to relax, enjoy riding and campfire with friends.

A ranch near Graceland

As we learn from the Presley Archives, Elvis bought in 1966, before getting married, his own ranch in the vicinity of Graceland. Within two weeks, he spent over $ 100,000 for vans and equipment. Thus, all of his friends visiting him would have a horse and "all what a cowboy needs". The meetings at the ranch and the life there were kept secret. Elvis did not allow many photographs taken there. "My home is my castle. It is not for the public", he used to say.

Already in 1957 Elvis starred in the Hollywood movie with the title "Lonesome Cowboy". Jerry Leiber and Mike Stoller wrote the composition. In the end, the title of the film was changed to "Loving you". The advisers of Elvis did not like the cowboy connection, in order to avoid any "stupid questions", as Colonel Tom Parker later said. As his manager of Elvis Presley, Parker was the person who had the most influence on the star. Until the end of his life, Parker avoided any activity that could bring up the question of bisexuality. The Colonel hated the word 'gay' as the devil himself. Parker always worked hard for this image: Elvis Presley is a womanizer. But the real facts have not yet been discovered. (27.1.2006)