US students in the art museum of the Nörvenich Castle 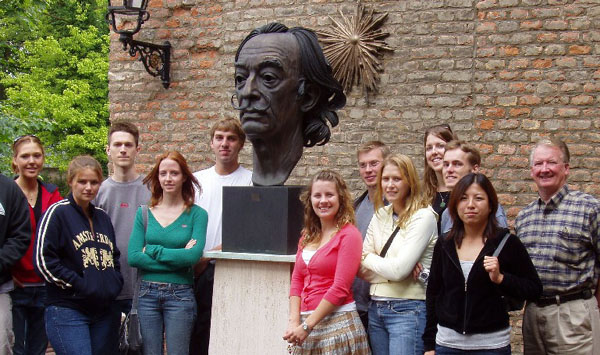 Students from USA have at once recognized the magnificent portrait of Salvador Dalí. This bronze sculpture by Arno Breker belongs to the most favorite motives of the visitors to the museum. The photo shows some of the students, who have come from afar to visit the Nörvenich Castle near Köln.

Nörvenich. A group of US university students from California have, during their study tour of several European countries, visited the art museum of the Nörvenich Castle in Germany. Guided by professor Winder McConnell, the students showed interest in the presentation of European art in its rich multiplicity, from Kurt Arentz to Pablo Picasso. Special attention drew the collection of the Arno Breker Museum with the works of the most significant sculptor of the classical tradition of the 20th century. "It is a good reason to come here, since at the Nörvenich Castle there is the most comprehensive exhibition with the works of the 'artist of the century' Arno Breker (1900-1991), said professor McConnell.

The curator Thomas Blumann of the European Art Foundation remarked on the good German-American cultural contacts: "Naturally, we are pleased that young people from the West Coast of the USA come here to wee Breker's works, which they so far have known only from movies and books." The sculptural and graphic work of Arno Breker has a great fascination for foreign art students, as well as art historians from Europe and overseas.

After spending time in Düsseldorf, Köln and Munich, the students visited Paris, Milan and Rome. When given the choice between a visit to the capital Berlin, the students decided in favor of the art museum at the Nörvenich Castle, with its collection of European art.