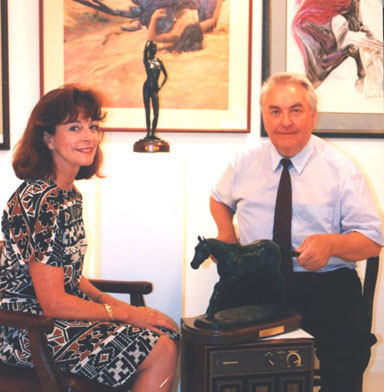 Solvang, CA / New York (meap) The sculptor Pat Roberts from Solvang, California, has been named the "Artist of the Month" by the Museum of European Art and the European Art Foundation in Berlin. She has achieved international reputation with her bronze sculptures of horses.

The subject of most of her works--the horse--has been a significant part of her life. She and her husband live on a horse farm near Santa Barbara, California (they were neighbors with President Reagan's ranch), where they raise race horses. And her husband, Monty Roberts, is the "Horse Whisperer", whose books, TV programs and horse shows have many admirers. So Pat has been around horses for a long time, observed them close up and when she developed interest in sculpture, they soon became the main subject of her creative work. Horse lovers in Europe, Canada, Saudi Arabia and Japan have her bronze horses in their collections.

The German sculptor Kurt Arentz, who himself also started his artistic work as a sculptor by making bronzes of bulls, horses and eagles, was the first prominent artist to appreciate and promote her work in Europe. Pat Roberts is a Lady-Knight of the international Order of Alexander the Great for Art and Science, along with several other prominent women, including Renate Stendar (Switzerland), Ruth Zucker (Israel), and Veryl Goodnight (USA) and Alessandra della Valentina (Italy). Several of her early works are also in the "Eleanor & Wilson Greatbatch Collection" of the Museum of European Art.