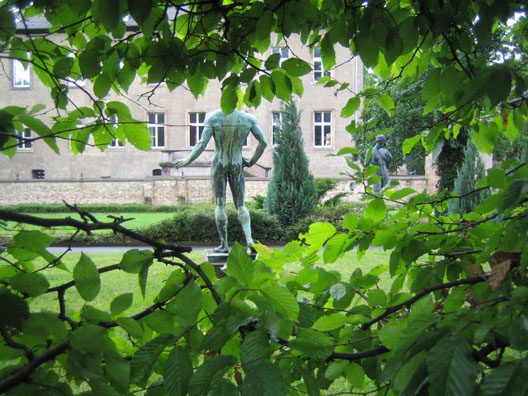 A glimpse into the Garden of Beauty: bronze sculptures of the classical period of Arno Breker in the park of the art museum of the Nörvenich Castle in Germany. (www.museum-arno-breker.org).

Mainz/Berlin (bpb) Arno Breker was the fascinating subject of the program "Time for Culture" of the German TV channel 3SAT, titled „Breker & Co." On the examples of the star sculptor Arno Breker, his master student Bernhard Heiliger, Ludwig Gies, who was successful in the NS times with his eagles, and the so-called 'state artist' Bernhard Heising in the communist East Germany, the question of entanglement of Art and State has been presented to the viewers. Of course, it was not possible to do justice to this complex theme in a few minutes. Based on their excellent research, the authors Stefan Vogel and Martin Priess were able to present at least a glance behind the stage of these historical happenings.

Aside of the comments of the moderators and the usual defamatory remarks against Arno Breker, the cameramen Willi Neumann and Dirk Sittnik have been able to capture pictures of the works of the artist, which have never been shown on the German TV. A prized achievemnt of the Studio 52 GnbH, Berlin.

In the movie we find out among others things: „Art in public spaces--whether at a representative building, a political site or in the everyday business life--embodies the society's feelings of its era and creates its symbols. But much less known than the works of art are the artists who created them, and their role in the German history."

Ludwig Gies, the creator of the 'Bundesadler' (a newly-stylized eagle as the official emblem of the post-war West Germany), had for example created similar eagles for official buildings during the Third Reich. One of them was the new Reichsbank (German State Bank). Despite his activities in the Nazi-times, he received the commission for the "fat chicken", the symbol of the young Federal Republic of Germany. Similarly, the career of another German sculptor continued after the war without problems: Bernhard Heiliger. 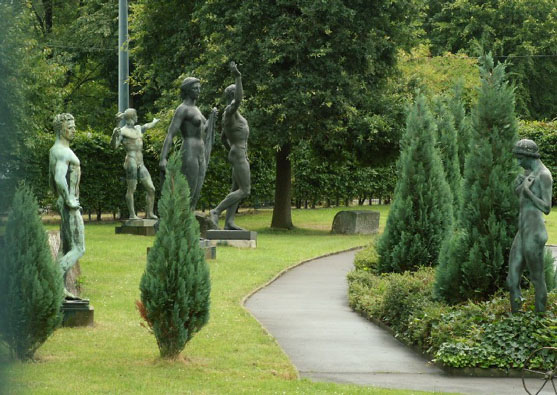 A gathering of the Gods: the magnificent bronze sculptures by Arno Breker in the park of the museum at the Noervenich Castle in Germany are an attraction for the friends of classical art. Visitors from all over Europe and USA come here to view these works.

In 1958 Bernhard Heiliger represented the Federal Republic of Germany even at the Art Biennale in Venice. His career started in the Hitler-time as the master student of Arno Breker. The Bernhard Heiliger Foundation is researching these days this unknown phase of his creative work. The curator of the foundation is Marc Wellmann, his son-in-law. "Arno Breker had freed him from military service, and supported him whenever he could", according to Wellmann. "Breker considered Heiliger to be his greatest, most talented student. For his part, after the war Heiliger did not distance himself from Breker, as many others whom he had benefited did. Sabine Wellmann-Heiliger, the last wife and widow of the artist, says: "He had to die first, in order to be justly appreciated. Today that sounds a bit funny, but it is so."

The Arno Breker Archives in Bonn: In a sworn testimony from Breker's de-nazification process the Jewish book publisher Peter Suhrkamp thanks Breker for saving his life. Suhrkamp was arrested after the failed "July 20th" assasination attempt on Hitler for being a sympathizer of the insurrection, and was sent to a concentration camp in Sachsenhausen. Breker has visited him in his death cell, and by intense, personal involvement came to his defense. Suhrkamp was released.

As positive example of a subsequent admission of one's errors, the TV station 3SAT used the former "state artist" of the communist Easte Germany, Bernhard Heisig. In his young years he was a member of the SS, and after 1945 he rose up to be a leading artist. Today he admits that he erred during the communist dictatorship. The old painter, who now sits in a wheelchair and continues to work as a artist, has been integrated into the democratic system. Arno Breker (1900-1991) has worked after 1945 in Paris, Africa and Germany. During the 45 years that he worked in the democratic society after 1945 he proved again and again his understanding for freedom and human rights. Yet, the art historians in the Federal Republic of Germany continue to deny him to this day the respect that he deserves.

On the other hand, some personalities openly take Breker's side and proclaim that the freedom of art, which is anchored in the Basic Law (German Constitution), applies aslo to Breker: among them are the Jewish painter Ernst Fuchs (from Vienna, Austria) and the historian Professor Dr. Hermann Schäfer. The president of the foundation "House of German History" has spoken against the tabu of objectively speaking about the art of the years 1930-1945, The painter Maler Fuchs wholeheartedly supports his artist-friend Salvador Dalí, who said: „Arno Breker is the greatest sculptor of the 20th century."