US regime secretly taken over by neocon cabal

Vice-President Dick Cheney and a handful of others had hijacked the government's foreign policy apparatus, deciding in secret to carry out policies that had left the US weaker and more isolated in the world, the top aide to former Secretary of State Colin Powell claimed on Wednesday.

In a scathing attack on the record of President George W. Bush, Colonel Lawrence Wilkerson, chief of staff to Mr Powell until last January, said: "What I saw was a cabal between the vice-president of the United States, Richard Cheney, and the secretary of defense, Donald Rumsfeld, on critical issues that made decisions that the bureaucracy did not know were being made.

Mr Wilkerson said such secret decision-making was responsible for mistakes such as the long refusal to engage with North Korea or to back European efforts on Iran.

It also resulted in bitter battles in the administration among those excluded from the decisions.

"If you're not prepared to stop the feuding elements in the bureaucracy as they carry out your decisions, you are courting disaster. And I would say that we have courted disaster in Iraq, in North Korea, in Iran."

The comments, made at the New America Foundation, a Washington think-tank, were the harshest attack on the administration by a former senior official since criticisms by Richard Clarke, former White House terrorism czar, and Paul O'Neill, former Treasury secretary, early last year.

Mr Wilkerson said his decision to go public had led to a personal falling out with Mr Powell, whom he served for 16 years at the Pentagon and the State Department.

"He's not happy with my speaking out because, and I admire this in him, he is the world's most loyal soldier." 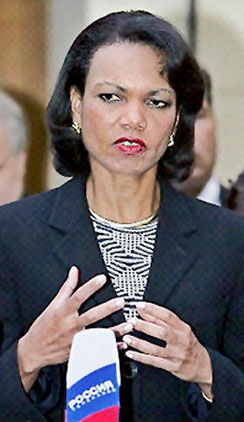 The former national security advisor Condoleeza Rice was "part of the problem".

Among his other charges:

1) The detainee abuse at Abu Ghraib and elsewhere was "a concrete example" of the decision-making problem, with the president and other top officials in effect giving the green light to soldiers to abuse detainees. "You don't have this kind of pervasive attitude out there unless you've condoned it."

2) Condoleezza Rice, the former national security adviser and now secretary of state, was "part of the problem". Instead of ensuring that Mr Bush received the best possible advice, "she would side with the president to build her intimacy with the president".

3) The military, particularly the army and marine corps, is overstretched and demoralised. Officers, Mr Wilkerson claimed, "start voting with their feet, as they did in Vietnam. . . and all of a sudden your military begins to unravel".

Mr Wilkerson said former president George H.W. Bush "one of the finest presidents we have ever had" understood how to make foreign policy work. In contrast, he said, his son was "not versed in international relations and not too much interested in them either".

"There's a vast difference between the way George H.W. Bush dealt with major challenges, some of the greatest challenges at the end of the 20th century, and effected positive results in my view, and the way we conduct diplomacy today."