Jutta Vogel leads a delegation to congratulate a great lady 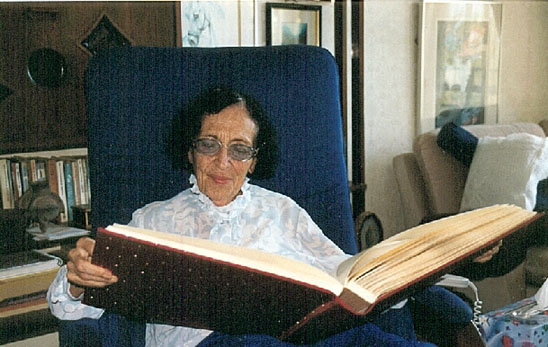 Ruth Zucker at her 90th birthday in Haifa. The messages from around the world are collected in a book, bound like an old Bible. Behind on the wall the lithograph "El Alamain" is seen, the favorite horse of the US President Ronald Reagan.

Haifa/Berlin/New York (bpb) Happy birthday to you, Ruth Zucker, in Israel! The outstanding lady became 90 years in June 2004. Ruth Zucker has many merits for the building up of the State of Israel, and served this idea since she left Germany soon after 1930. In her engagement she was a freedom fighter, a spy for Israel in the early years of fighting against the British occupation of Palestine, and an adviser to many presidents and politicians in Israel.

Ruth Zucker was born in a wealthy Jewish family in Bonn, Germany. She was educated in European countries such as Switzerland and others. She is an international expert on graphology and astrology, an author of books and articles published in various media.

"Ruth Zucker is for her admirers around the globe something like Mother Israel", said Joe F. Bodenstein, the spokesman of the European Art Foundation in Berlin. She is a Knight of the Alexander Order for Art and Science, along others like Sir Peter Ustinov, Ernst Jünger, Hermann Oberth, Kurt Arentz, Salvador Dalí, Pierre Peyrolle, Wilson Greatbatch and Prof. Dr. Uta Ranke-Heinemann.

The German writer Jutta Vogel from Berlin brought a delegation to Israel to hand over congratulations of politicians, scientist, artists, personal friends and the Alexander-Order. Mrs. Vogel arranged a special Dinner: famous asparagus from Germany, new potatoes and smoked ham -- a favorite dish of Ruth Zucker from her native country.

A sightseeing program on this marvellous day included a visit of the Bahai-Temple in Haifa's Mount Carmel. Ruth Zucker recommended this "holy place" as an example of freedom for other religions in the Jewish-governed Israel. Zucker has known the supporters of this "House of Worship" for decades. 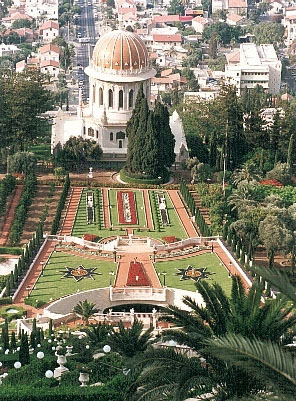 The house of Worship, seen from the hillside. A place of peace and prayers for all people of good will in Israel. The colorful vegetation and flowers give an impression of a paradise.

The Bahá'ís are part of a world-wide religious community united by the belief that there is one God, one human race, and one evolving religion. The founder of this religion, which now has millions of believers, is Bahá'u'lláh, born 1817 in Persia, (modern day Iran). Bahá'u'lláh is a Messenger of God for all of humanity in this Day. The cornerstone of His Teachings is the establishment of the spiritual unity of humanity. He has revealed a system of Laws and Ordinances to guide humanity toward its spiritual maturity. He teaches that Abraham, Zoroaster, Moses, Krishna, Buddha, Jesus, and Muhammad are all Divine Messengers, progressively revealing God's Divine Plan to bring about the Kingdom of God on Earth. His father was a government minister. In His youth, Bahá'u'lláh was known as the "father of the poor" for his deeds of kindness.

In USA, a Bahá'í House of Worship is located north of Chicago, Illinois.