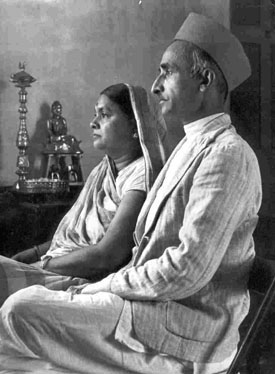 Ravishankar Raval with his wife Ramaben at his house "Chitrakut" at Ahmedabad (1930).

For centuries, the State Gujarat in India has remained a center of Indian business and commerce. Its people have been proven traders globally. During the early part of the 20th century Gujaratis were taunted as money hungry community devoid of culture. Only painter the average Gujarati knew was a signboard painter.

In that situation, Ravishankar Raval made a remarkable effort of establishing the status of art in Gujarat. Besides he himself being a well-known artist, he produced a completely new cadre of accomplished young artists. Well-known Gujarati literature Kaka Saheb Kalelkar titled him Kalaguru (in Sanskrit, meaning a grand master of art). Even today, a large number of his students are teaching art in the schools of Gujarat.

Dr.A. Koomarswamy, H.B. Havel and Ravindranath Tagore took great pains to make Indian artists and art lovers understand and inspire from Indian art and not to cling to the British academic style of the British Raj. In Gujarat, Kalaguru Raval made great efforts in the same direction and brought about the renaissance of Indian art. Although his formal art training took place under the principal Cecil S. Burns of J.J. School of Art, he evolved his own rich style as inspired by the ancient Indian classical painting traditions. 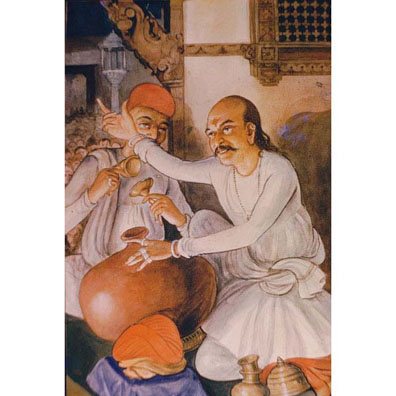 Premanand (1640-1712), a Gujarati bard who used a hollow copper sphere played with metal rings as a musical accompaniment. A watercolor.

Ravishankar Raval was born on August 1, 1892 at Bhavnagar. As his father was an officer in the British Post and Telegraph Service, family was transferred often from town to town, which gave the young Ravishankar many opportunities to meet a wide cross section of the folk culture of Gujarat. Later in his diary, he writes," No one in my family was an artist so I cannot claim a direct heritage of art from any one. However, I received my artistic instincts from my mother. She was a cultured and well-organized person. I would say that I got my art psyche from her". As a little boy, he would borrow the red-blue pencils from his postmaster father's office desk and sketch the objects around him. And for the rest of his life he was never seen idle without his sketching pad. That made him a master illustrator.

During his first university year at the local Arts College, his principal asked him to paint the stage sets for the college drama festival. He was pleased with young Rival's work and remarked, "Young man, do not waste your time here, go to Bombay and join the art school." This comment homed into the secret ambitions in the mental recesses of Ravishankar. When he expressed his wish to his father, a seasoned government bureaucrat, responded, "Be practical. Be an engineer. Drawing doodles would not get you anywhere." Disappointed, the younger Raval mumbled, "College classes bore me. My heart is in art." The artist in Ravishankar won over the engineer and he procured admission in J.J. School of Arts at Bombay a major cosmopolitan city compared to his hometown.

Besides an exceptionally brilliant school career at J.J. School of Arts, the student Ravishankar was exposed to the prominent writers, thinkers, journalists of that time. In 1915, he met a prominent journalist Hajji Mohammad Alarakhiya, who was looking for a young artist-illustrator for his new cultural magazine "VISMI SADI" (20th Century).Hajji gave him the job. That contact gave a brand new purpose to his life mission. He worked for VISMI SADI for many years until its closing with the premature death of its creator Haji Mohammad in 1921. Though Hajji's death was a terrible blow to young artist Raval, he was inspired to start an avant-garde cultural magazine "KUMAR" at Ahmedabad in 1924 which is still being published 77 years later. 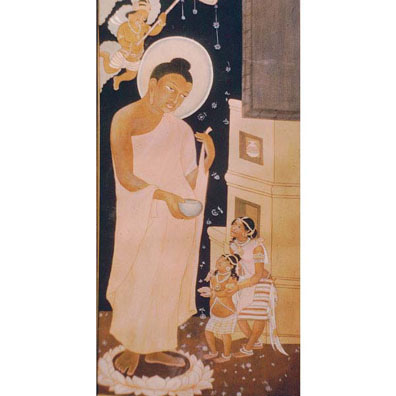 1918 onwards till his death in 1977; Ravishankar Raval lived and flourished in the city of Ahmedabad with his ever-increasing involvement in the art world. Following are the outstanding milestones of his life:

1924 Start of the cultural magazine KUMAR

1941 President of Art Society of India

1951 All India Art Conference at Calcutta

1965 Nehru Award for his book on Russia

1965 Government of India honored him with the title "PADMASHRI"

1970 Fellow of the Indian Art Academy

1977 Passed away peacefully after a short sickness at 11 a.m. in his own house CHITRAKUT at Ahmedabad. After taking leave of his life long devoted wife Ramaben, he closed his eyes with the ultimate sound of the holy mantra "Aum Namah Shivayah" (Homage to Lord Shiva) on his lips. 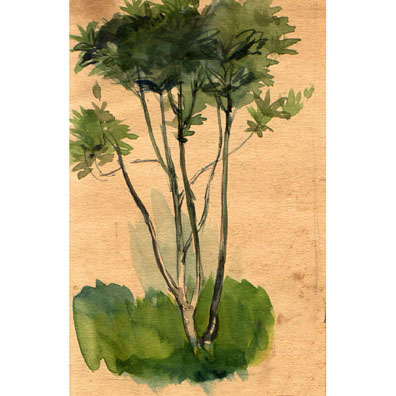 A tree in Monsoon. A watercolor.