Prince Felipe is a Knight of the Alexander Order 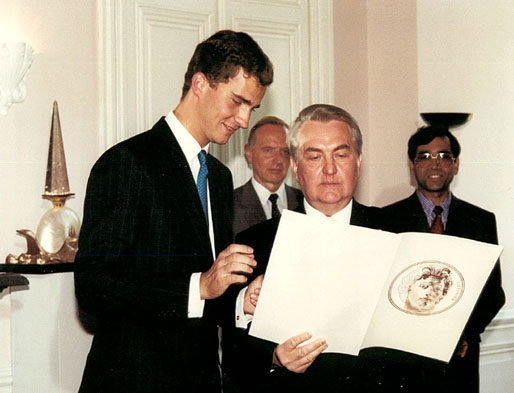 Prince Felipe, the heir of Spain, accepts the certificate of his honorary Membership in the Alexander Order for Art and Science. The curator of the Order, Joe F. Bodenstein, reads the text of the document during a reception in honour of His Royal Highness at Noervenich Castle. At the right: John G. Bodenstein, president of the European Art Foundation.

Bonn (bpb) On his first official visit to Germany in 1991, Prince Felipe received the honorary membership of the Alexander Order for Art and Science (OAG). The heir of Spain impressed the officials by his charm and intelligence. He also met for the first time the German President Richard von Weizsäcker, internationally a most popular personality.

The ceremony took place at the Noervenich Castle, the European residence of the Alexander Order. The documents were handed over by the Curator Joe F. Bodenstein on behalf of the Grandmaster Roger Peyrefitte (Paris) and OAG-Chancellor B. John Zavrel (USA), who were on this very day on other official missions abroad.

At the event the Prince learned in the presence of the German Foreign Minister Hans-Dietrich Genscher, that his grand-grand-mother (the late daughter of the last German Emperor) was also once the Grandmaster of the Order, and his grandfather, King Paul of the Hellenes, was once the patron of OAG.

During his stay at Noervenich Castle, the Crown Prince of Spain opened an exhibition in honour of the famous painter Salvador Dalí. The European Art Foundation with its president John G. Bodenstein has organised this exhibition. Over 500 invited guests enjoyed the event, in the company of the quite happy looking heir. The young prince represented the Royal Family and the Kingdom of Spain perfectly, and was applauded by the guests. 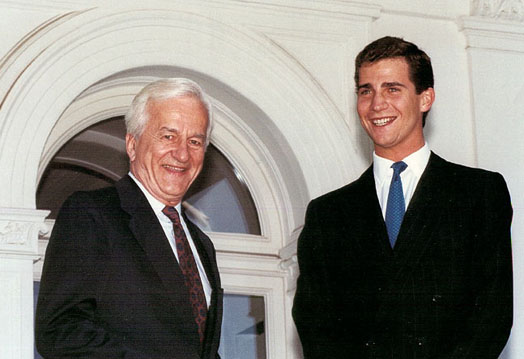 A cheerful German President Richard von Weizsäcker and a happy, smiling Felipe, the Prince of Asturias, after their talk during the first official visit to Germany by the heir of Spain.