Salvador Dalí has been dead for 20 years

The King of Surrealists remains loved and not forgotten 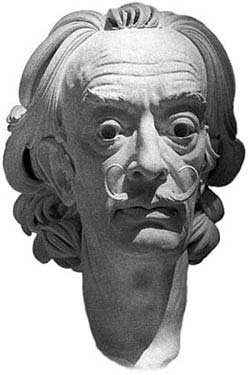 Portrait bust SALVADOR DALI by Arno Breker. The Frenchman Roger Peyrefitte, Grandmaster of the Alexander Order, said about this artwork: "Ther will never be a more beautiful bust of Dalí than the one which Breker made of him: the greatest genius of a painter of the 20th century is in it perfectly presented with all his obsession, his all-devouring eyes; at the same time a conqueror, conquistador and picador. Conquistador in all areas of art! Picador, who with his banderillas has made holes into all conformism.

New York/Madrid (bpb) Dalí has been dead for 20 years. The King of the Surrealists, Salvador Dalí, died on January 23, 1989. His sculptor friend Arno Breker, who has created the most noble portrait-bust of Salvador Felipe Jacinto Dalí i Domènech, Marqués de Púbol gestaltete, has him outlived by two years. On the occasion of the death anniversary, The Museum of European Art at the Noervenich Castle near Cologne, Germany had the portrait-bust of Dalí be decorated with flowers. They included white lillies, which both Dalí and Breker loved. The third person in the group of „Artists of the Golden Triangle", the painter Ernst Fuchs, remembered this about Dalí: „He was a great personality. One cannot become Dalí, one had to be Dalí from the very beginning."

Dalí's fame as a painter is due mainly to his magnificent paintings, some of which can ber found today in the Morse Collection of the Salvador Dalí Museum in St. Petersburg, Florida. Even during his lifetime, he was better known on all the continents than Pablo Picasso.

After Dalí's death, due to many quarrels regarding the rights of his heirs and the authenticity of art objects, it has become a bit quieter in the media about this ingenious painter of the 20th century. But still, the master is not forgotten by the millions of the admirers of his art.

To the most beautiful illustrations by Dalí no doubt belong the more than 100 paintings on the theme of the Divine Comedy by Dante. The were produced as woodcuts, using a special technique. Due to their joyful colors, the pictures seem like watercolors. Dalí said about some of these motives, which had been thus turned into graphics, that they were 'even more beautiful' than the original watercolor designs.

The fascination, which comes out of the works of the painter, is unusual. Even his sculptures, which usually were produced according to his drawings, have a strong effect on the viewer. This applies also for the 'montages' done after works from antiquity, such as Venus of Milo, which became 'Venus a la Giraffe'. 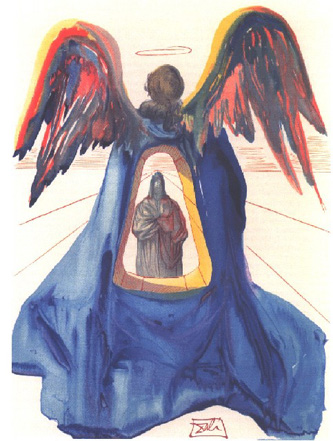 Surrealistic Angel from La Divina Comedia de Dante. It is published in the exhibition catalog 'Dante: The Divine Comedy', with all 100 pictures of Dalí's illustrations. This very rare catalog can be ordered from zavrel@meaus.com

The art museum, dedicated to Salvador Dalí in Figueres, Spain with the ludicrous figures on its roof, has become a giant tourist attraction. The former house of Dalí, located by the sea, has become a place of pilgrimage by his admireres from all over the world.

The Americans have made available as loan for an exhibition in the anniversary year 2009 one of the most famous works of the artist: the painting 'The Persistence of Memory'. This picture is also known under the title 'The Soft Watch". The painting from the year 1931 became, despite its small size of 27 x 33 centimeters, a 'poster-child' of surrealism. It belongs to the Museum of Modern Art MOMA in New York.

Dalí remains in the year 2009, as he was during his lifetime, controversial and puzzling. That also goes for the area of politics. He was a self-admitted capitalist, who loved freedom and wealth. The artist wa puzzling already as a young man with his political tendencies. First, he travelled in the leftist circles, later he expressed admiration for Adolf Hitler and became friends with the Spanish dictator Francisco Franco (1939-1975). According to the opinion of critics, Dalí has always stood 'on the side of the powerful, for his own profit'. But despite such numerous absurdities, bewilderments and scandals, is the love for the master by the art lovers firmly assured.