Figurative Sculpture and the Third Reich 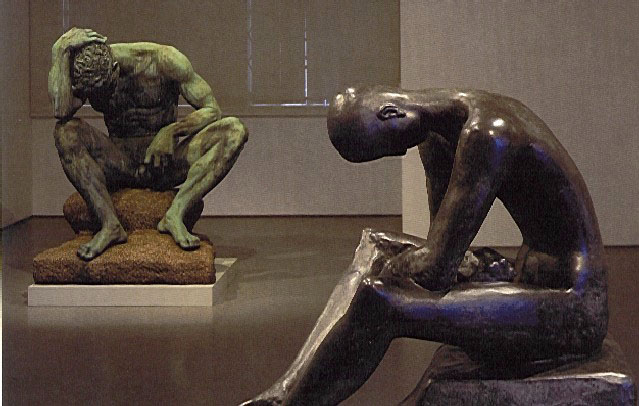 Leeds/Berlin/Bremen (map) "Taking Positions--Figurative Sculpture in the Third Reich" is the title of an extraordinary art show in 2001/2002. To be seen are works of favorite and disliked sculptors in the Hitler times. The biggest attraction of the show are three sculptures of Arno Breker (1900-1991), the leading sculptor of the classical tradition in this era. The idea for the concept came from Dr. Penelope Curtis, the curator of the Henry Moore Institute. Her experiment turned out to be very successful.

For those, who are not able to see the exhibition in England and Germany, we recommend the informative and richly illustrated catalog. This unique exhibition of 15 important fine bronzes should be seen in the United States, where more than 100 millions Americans are of German or English ancestry.

The make-up of the exhibition "Taking Positions" is easy to understand. Its chronological span 1918-1948 represents the years from the end of World War I until shortly after the next one. But it concentrates on the period after 1933. It is by no means a survey, but it rather sets up three groups of figures, for the purposes of comparison. These groups are premised on symbolism and narrative, classicism and modernity, movement and scale. The sculptors are Karl Albiker, Arno Breker, Hermann Blumenthal, Ernesto de Fiori, Ludwig Kasper, Fritz Klimsch, Georg Kolbe, Wilhelm Lehmbruck, Gerhard Marcks and Richard Scheibe.

The experiment of this kind of exhibition was already successful in England. This made it more easier for two German museums to take over the concept of Penelope Curtis. The leading engagement for this show came also from Dr. Ursel Berger, Director of the Georg Kolbe Museum in Berlin, and Dr. Josephine Gabler of the "Stiftung für Bildhauerei" (Sculpture Foundation). But the exhibition would have not taken place without the Henry Moore Institute and Penelope Curtis. The credit is due entirely to her.

In the past 50 years after the Nazi times, the German museums both in West and East were afraid to show art works of the period of the Third Reich in a neutral way. All the expositions were accompanied by personal defamation of the artists, just like the Nazis did with the "Entartete Kunst" -- "degenerate art."

Even the young art historians in the museums, who were born after 1945, are afraid to ask for the freedom to show this art, damned by the German government. They would be suspected of sympathising with the Nazi times.

It is hard to understand that such a fear should exist in Germany after 50 years of democracy, and the basic rights, rooted in the German constitution to "Freiheit in der Kunst" (freedom in the arts). No doubt, in such an unbelievable situation, the impulse for such an important exhibition could come only from a former victorious power of the alliance against Hitler, in this case from Great Britain.

Penelope Curtis writes in the bilingual catalogue: "This exhibition is deliberately modest in scale. It asks its viewer to make an 'unspectacular' appraisal of work that is often presented in a simply spectacular way. It is a rare chance to see this sculpture sculpturally, rather than pictorially, for the art of the Third Reich has predominantly been seen iconically , as imagery on the page. The proposal that sculpture needs to be studied closely is, in the case of this period, especially significant."

It must have been difficult to collect all these original works for this exhibition. Not included in the show is the sculptor Josef Thorak (1889-1952). His impressing bronze "The beauty after bath" (1934/35), for which the late famous Czech actress Anny Ondra, the wife of the boxer Max Schmeling stood model, would have suited well the exhibition. 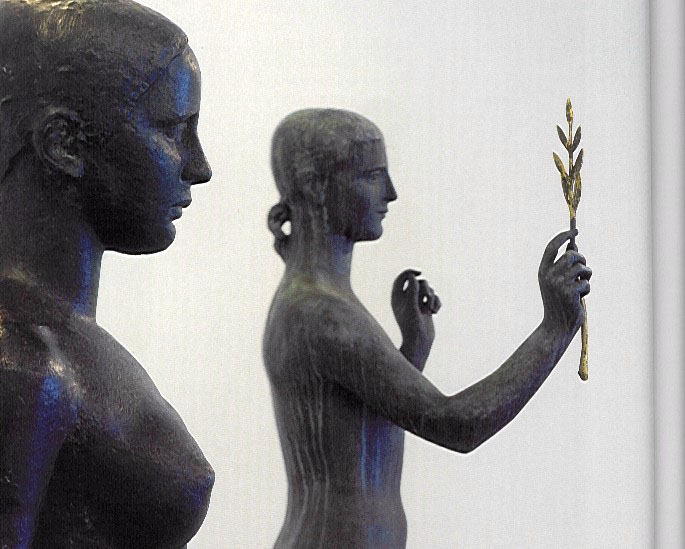 A sculpture with two titles: "Victory" and "Pax" (right, with laurel in hand) by Arno Breker

The catalog "Taking Positions" is a must

For art lovers and art collectors, the catalog "Taking Positions" is a must. It shows sculptures, many in full-page size, which have never been seen before in this connection. The text is in English and German.

The texts of the German authors are to be read with care. Neither Dr. Berger nor Dr. Gabler have inside knowledge about Arno Breker and his oeuvre, even though they write about it. Both art historians relied on archive materials, and used some wrong information about the sculptor. Thus, the their contributions are of limited scientific value.

You can order the catalog "Taking Positions" (price about $ 23) in: