Céline in a rare photograph 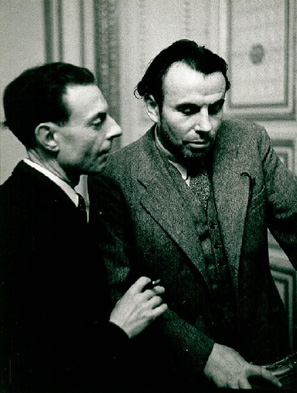 Louis Ferdinand Céline (right) 1943 with the writer Rene d'Ueckermann from Paris, as guest during a reception at the Jaeckelsbruch Castle of Arno Breker in Germany. This photograph was discovered in January, 2004.

Paris/Berlin (bpb) Louis Ferdinand Céline is one of the most popular French writers of the 20th century. His books are a must for the upper class and are very popular among the students of our time in France. Accused of collaboration, Céline fled (1944) France to live in Germany at Sigmaringen and then moved (1945) to Denmark. Condemned by default (1950) in France to one year of imprisonment and declared a national disgrace, Céline returned to France after his pardon in 1951.

Céline was one of the French writers, during wartime visited the famous sculptor Arno Breker in his large studio in the town of Wriezen, northeast of Berlin. Céline and other prominent authors were guests in Breker's Castle Jaeckelslbruch. Plans were made there about cooperation of European artists after the war.

Louis Céline, originally named Louis Ferdinand Destouches (born May 27, 1894, died July 1, 1961) was a French writer and doctor whose novels 'Journey to the End of the Night' (1932; English translation 1943) and 'Death on the Instalment Plan' (1936; English translation 1938) are innovative, chaotic, and anti-heroic visions of human suffering. Pessimism pervades Céline's fiction as his characters sense failure, anxiety, nihilism, and inertia. Céline did not like to communicate much with others, and during his life sank more deeply into a world of quiet desperation and helpless rage. A progressive disintegration of personality is visible in the stylistic incoherence of Guignol's Band (1944; English translation, 1954), Castle to Castle (1957; English translation, 1968), and North (1960; English translation, 1972). His novels are verbal frescoes peopled with horrendous giants, paraplegics, and gnomes, and are filled with scenes of dismemberment.