The Maha Mandaleshwara Sri Swami Veda Bharati in procession with devotees from the Swami Rama's Ashram 'Ram Nagar' in Rishikesh.

January 2001, Allahabad. Emerging from the sacred dip on the banks of the Ganges River at the Maha Kumbha Mela, Swami Veda Bharati assumed the full weight of his spiritual role as one of the most respected swamis of Hinduism, and of his own responsibility in continuing the teachings of his gurudeva Swami Rama.

"The experience confirmed and enhanced the authority granted by Gurudev Swami Rama" Swami Veda said after completing the sacred bath at the sangam -- the confluence of the Ganges and Yamuna rivers -- on January 24, the most auspicious day of the month-long Kumbha Mela celebrations at Allahabad.

"Only after taking the dip did I feel in me that I am a Mahamandalesvar," said Swami Veda, who was conferred the position in March, 1999.

"I immediately felt a sense of spiritual authority; that I now own the position. It conveys a sense of responsibility to lead which is greater than before," Swamiji said after partaking in one of the most colorful celebrations in the month-long festivities.

An estimated 20 million people took to the waters on January 24 -- the Mauna Amavasya, a date and time ordained by the pandits as occurring only once in 144 years, and the first in the new millennium.

The streets in the makeshift tent city set up on the dry river bed of the Ganges turned into a mammoth gathering of swamis, sadhus and devotees from all over the world as they prepared for the auspicious bath that day -- the highlight of which was a procession starting before dawn which Swami Veda took part in for the first time.

Gathering before dawn in the chill of the north Indian winter, initiates and devotees in Swamiji's camp joined a five-kilometer long procession which snaked its way for half an hour through the makeshift city, along a temporary pontoon bridge before reaching the sangam.

Watched over by Indian security forces -- on foot or mounted on horses -- and armed with wooden lathis (sticks) the procession wound its way through the surging crowds.

It was a scene which conjures images of processions in centuries of Maha Kumbha Melas -- which occur every 12 years. But instead of caparisoned elephants, the ochre-robed Mahamandalesvars were carried on iron trailers hauled by diesel tractors summoned to duty from wheat fields of Uttar Pradesh.

While Swami Veda had attended previous Kumbha Melas since 1952 -- all of them in Haridwar -- this was the first time he was participating in Allahabad, and the first time since he was conscrated as a Mahamandalesvar in March, 1999.

On a trailer decorated in maroon cloth and festooned with marigolds, jasmine and roses, Swami Veda sat on a silver-plated throne chair. Beside him sat Swami Hari, smiling beatifically, while Pandit Dabral stood by, looking poised and calm. A dozen or so devotees crammed on to the trailer for the five-kilometer long journey, while others walked behind.

In the pre-dawn darkness, the belching diesel fumes from the tractors and the confusion which often accompanies such processions in India, the significance and grandeur of the procession was not immediately palpable.

But as the sun's rays shone over the Ganges, the full magnitude of the crowds became apparent. It was an awesome spectacle.

Families lined some thirty-deep behind wooden barricades all along the procession route. They chanted, they sang, they clapped. Many held out their hands to ask for a blessing or a rose petal from a passing swami. Policemen laid aside their truncheons to throw flowers on to passing trailers of the procession.

Such is the faith in the power of these swamis, that in the past, pilgrims have been known to roll in the sand of a swami's trailer which had passed. Those gathered on this day were were the same pilgrims who had huddled over open fires, barely shielded from the cold of winter in thick blankets while they slept in the open. Entire families, even villages had walked -- some for over a week -- to witness this scene and to bathe.

Throughout the Kumbh Mela celebrations, loudspeakers at the makeshift city had blared announcements asking for lost ones to report to police posts to re-unite with their families. In the week before devotees of Swami Veda arrived at Allahabad, Indian newspapers had carried reports that 5,000 pilgrims had already been reported lost during the Kumbha Mela in which an estimated 70 million people were estimated to have attended.

Forty minutes after it started in darkness, the procession reached its destination and the devotees joined Swami Veda for a quick dip in the Ganges. Battling through crowds of other bathers, Swami Veda removed his ochre robes and stepped into the bone-chilling waters for the morning dip at the sangam.

While other devotees shuddered and shivered even as they felt a sensation of spiritual ecstasy as they emerged from the waters, Swami Veda stepped ashore calmly after his bath. "I am a heart patient and a diabetic. And yet I felt no cold as I emerged from the sangam. Instead I felt a sense of internal spiritual healing and a deep love and energy of consciousness," Swami Veda said.

Swamiji said that after the sacred immersion there was a change in consciousness; a deep compassion for each of the millions who sought a blessings. "Which of these do I really need to bless? my mind asked. I scanned the throngs; selected the ones I felt were connected to me no matter how distant in the crowd. Somehow their eyes would mesh with mine and I would raise a hand in blessing". It was all being ordained by some other force.

This "force" which filled Swami Veda with compassion and guided him in his own spiritual realization in the 2001 Kumbha Mela, is the same unseen power which watched over the millions who thronged Allahabad in mankind's greatest gathering for a single purpose -- the search and experience of the Divine. 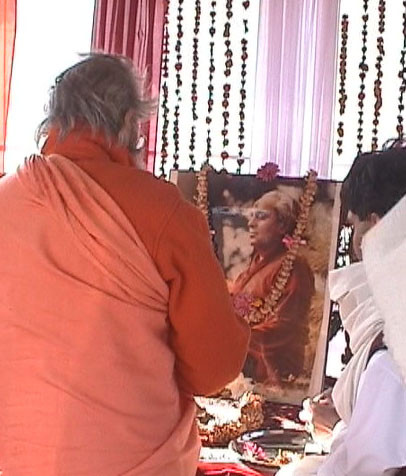