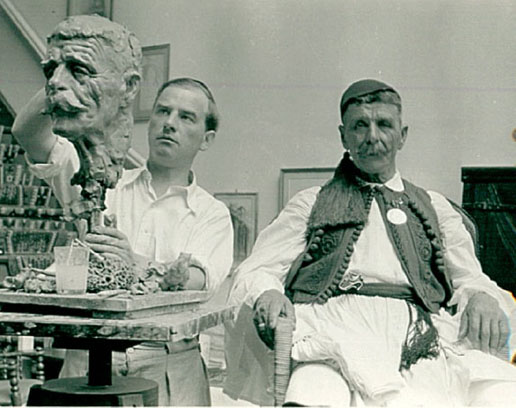 The famous marathon winner Louis Spyridon is posing for the sculptor Arno Breker in Berlin in 1936. The greatest honor given to him after his historical success during the Olympic games of 1896 took place in Germany. The world's leading sculptor Arno Breker did a portrait of him, and became a close friend of the sportsman. Spyridon (1873-1940) was invited to the Berlin 1936 Olympics by the German Government, received by Adolf Hitler and honored on several occasions during his stay in Berlin. The photograph from the Olympia Archive shows the aged Greek athlete in the studio of the 36-years young Arno Breker.

Berlin (bc) After bearing the flag of the Greek team during the opening ceremonies at the Olympic Games 1936 in Berlin, Louis Spyridon was received by Adolf Hitler. "Der Fuehrer" was pleased to accept from his hand several fresh branches from Olympia, the birthplace of the Olympic Games, as a symbol of peace.

Born on January 12, 1873 in Maroussi near Athens, Louis Spyridon, a 24-year-old Greek shepherd became the real hero of the 1896 Games.

There was no event that the Greek hosts wanted more to win than the 40,000-meter marathon race. It was created to honor the legend of Pheidippides, who allegedly carried the news of the Greek victory at the Battle of Marathon in 490 BC by running from Marathon to Athens.

On April 10, 1896, Louis Spyridon, wearing shoes that had been donated by his fellow villagers, set off from Marathon with sixteen other runners. He took the lead four kilometres from the Panathenaic Stadium and, to the great joy of the 100,000 spectators in and around the stadium, won the race by more than seven minutes.

Forty years later in Berlin, Spyridon recalled the moments after his victory: "That hour was something unimaginable, and it still appears to me in my memory like a dream…. Twigs and flowers were raining down on me. Everybody was calling out my name and throwing their hats in the air…."

His last public appearance was in 1936, when he was invited as a guest of honor by the organizers of the 1936 Summer Olympics, held in Berlin. Four years later, on March 26, 1940 Louis Spyridon passed away in his native Amarousi. Since then, many sports clubs in Greece and abroad still carry his name, as does the main stadium at the Athens Olympic Sports Complex, where the 2004 Summer Olympics were held.