by Henrik Ibsen, in a new version by Richard Eyre 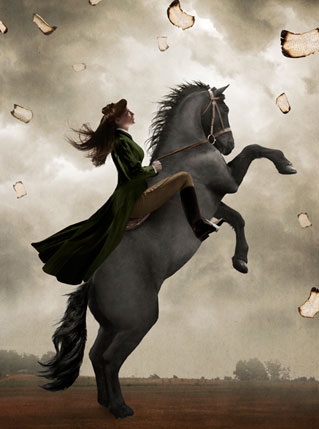 Henrik Ibsen's play Hedda Gabler is now playing at the George Bernard Shaw Theater at Niagara-on-the-Lake in Ontario, Canada. An hour drive from Buffalo, New York as well as from the nearby Toronto, the festival has been attracting thousands of visitors annually.

These things come over me, just like that, suddenly. And I can't hold back.

Hedda has returned home after her honeymoon with George Tesman --the man no one expected the wild daughter of General Gabler to marry. What's clear is that marriage has not tamed her in any way--she's as spiteful, as funny and as bored as ever. And being a nice married lady at home will not satisfy her. When Thea, her old high school rival (Hedda insists they were friends, even while pulling her hair) confesses she's been working with Eilert Lovborg on a new book, Hedda can't believe it. The man she once shared secrets with, toyed with, and maybe even loved has apparently sobered up and written a brilliant book that could win him the job her husband had been counting on. Jealous of Thea's influence over him, she provokes Lovborg to get drunk and go to a party. When Tesman returns home from the party with the manuscript of Lovborg's great work, Hedda cannot resist. And when her old friend Judge Brack reveals what he knows of her part in this scheme, she is trapped and makes the ultimate escape.

Hedda Gabler is a play and a character that has inspired endless debate and commentary, as well as award-winning performances. Oscar Wilde said about watching the play, "I felt pity and terror, as though the play had been Greek." Playwright John Osborne (The Entertainer, Look Back in Anger) wrote an adaptation of the play and said of the title character, "Her tragedy, if it can be called one, is that of being born bored and that is what is fascinating about her in the annals of dramatic literature." And Shaw said of the play, "The tragedy of a Hedda in real life is not that she commits suicide but that she continues to live! There is not one of Ibsen's characters who is not, in the old phrase, the temple of the Holy Ghost, and who does not move you at moments by the sense of that mystery."

The role of Hedda Gabler has been called "the female Hamlet" in terms of its scope and depth and has attracted major actresses throughout history including Eleonora Duse, Ingrid Bergman, Diana Rigg, Isabelle Huppert, Kate Burton, Fiona Shaw, Maggie Smith, Annette Bening, Judy Davis and Cate Blanchett. Charles Isherwood in the New York Times said of this character and her enduring legacy, "Hedda Gabler is one of the eternal fascinators of the world stage. Since she sprang from the imagination of the Norwegian playwright Henrik Ibsen in 1890, this cold-hearted anti-heroine has maintained a tight grip on the attention of audiences across the globe, outstripping all the many other complicated women in Ibsen's oeuvre."

This version of Hedda Gabler &endash chosen by director Martha Henry from a great stack of possibilities &endash is by British theatre and film director Richard Eyre. It was first performed at the Almeida Theatre in London in 2005 and Michael Billington, theatre critic for The Guardian, wrote of the production, "what we get is not a po-faced piece about female victimization but a savage comedy about a woman with an endless capacity for ironic contempt." Our production, directed by Martha Henry, features Moya O'Connell as Hedda, Gray Powell as Lovborg, Patrick McManus as her husband Tesman, Claire Jullien as Thea and Jim Mezon as Judge Brack.