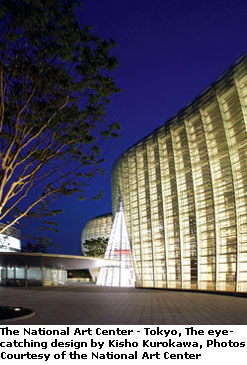 TOKYO, JAPAN - The exhibition "Living in the Material World: 'Things' in Art of the 20th Century and Beyond", inaugurated the opening on January 21, 2007 of The National Art Center, Japan's newest and biggest art museum.

The 20th century was an age of materialistic civilization centered on cities.  The experience of living in a world surrounded by abounding material 'things,' huge quantities of manufactured goods and commercial products, was something completely new to human beings.  Artists who sensitively responded to this new situation began to incorporate material 'things' into their artistic expression in various forms.

The exhibition shows more than 500 artworks

This exhibition introduces diverse forms of 20th century art expressed through bold experiments of artists with spirit of adventure.  It explores the fields of design, craft, and architecture as well as the fine arts.  In addition to the works of art in the collection of the national art institutions, this exhibition brings together more than 500 valuable works of art from all parts of the world, with the generous support from major museums in Japan and abroad.

Large-scale installations will be created by seven important artists from Japan and overseas, who pursue cutting-edge contemporary forms of artistic expression.  This unprecedentedly ambitious and comprehensive exhibition, presented in a huge exhibition space measuring 6,000 square meters, will attract art communities both domestically and internationally.

With its striking facade of waves of glass, The National Art Center, Tokyo, need not beg to differ.  A bold move to Roppongi away from the cluster of national and metropolitan-run institutions in Ueno, the new museum encompasses an astounding 48,000m2, making it the largest in Japan.

With no collection of its own, the National Art Center, Tokyo's 12 exhibition rooms will be divided between shows organized by nationally recognized art associations (ten rooms) and those used for curated exhibitions (two rooms).  Alongside the state-of-the-art exhibition spaces are a restaurant and three cafés, a shop, an auditorium, three lecture rooms and a public art library containing 50,000 publications, largely art exhibition catalogues.

The building is a work of art in itself. The eye-catching design by Kisho Kurokawa is best appreciated from the Roppongi Hills observatory.  With a "mori no naka" (in the middle of the woods) theme, the architect based the curved frontage on computer-rendered rhythmic images formed by mountains and the seashore.

Inside, the atrium blends two huge conical pods with natural wood flooring, andon-style lights that illuminate a bank of slatted walls, and leafy views of Aoyama Cemetery.  It's a breathtaking welcome that befits the museum's original concept as a hirakareta bijutsukan&emdasha museum opened to all.

With more than 30 million residents, this is the most populous metropolis in the world&emdashand its pockets are deep. In 2005, the three most-attended museum exhibitions in the world were all in Tokyo, according to Art Newspaper's annual survey, with the Hokusai exhibition at Tokyo National Museum attracting more than 9,400 visitors a day, the largest number on record.

Since the national museums were semi-privatized in 2001 to make them responsible for generating a profit, there has been an effort to offer crowd-pleasing shows.  The museum's target is 1.5 million visitors in 2007.

The new museum's inaugural exhibition, "Living in the Material World: 'Things' in Art of the 20th Century and Beyond," will run January 21 to March 19, 2007 and is a practical compilation of more than 500 works from about 280 artists, borrowed from several museum collections in Japan and abroad, including The Museum of Modern Art in New York.