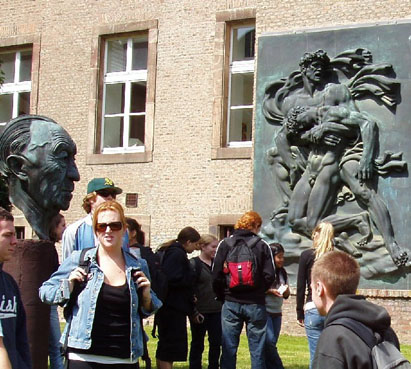 Students from the United States in front of bronzes by Arno Breker at the museum park at the Noervenich Castle in August, 2006. Great admiration for the masterpieces of Classical Art.

Berlin/Los Angeles (bpb) An international group of students from the United States of America visited the Museum of the world-famous European sculptor Arno Breker at the Noervenich Castle near Cologne. In the group from the West coast were young people from Russia, Indonesia, Formosa and Africa, who are studying in America. They were on tour with Professor Winter McConnell, to learn more about Europe.

"America is a leading country in many fields", Winter McConnell said at the Museum. "A cultural education for the young generation is very important. To visit European countries helps them ingoing back to the roots, from which their ancestors came from."

The visitors could see not only great works of Arno Breker, but also works of art by his friends Salvador Dalí and the Jewish Painter Ernst Fuchs (Austria). They are the "Golden Triangle" in art. The museum Arno Breker has lent its works for display at Schleswig-Holstein-Haus in the city of Schwerin (Mecklenburg-Vorpommern). This art exhibition with governmental support finds international attention and critics. Newspapers, magazines, TV and radio broadcastes from around the world--including South America, Japan and China-- all report about this event.

The curator of the Arno Breker Museum, Joe F. Bodenstein, discussed with the American students the life and work of Arno Breker and other artists of his époque, such as Marc Chagall, Pablo Picasso, Aristide Maillol, Alexander Calder, Jean Miro, George Braque and others. The students were interested to learn more about German artists who had been highly respected in the Nazi times such as Georg Kolbe, Fritz Klimsch, Josef Thorak, Adolf Wamper, Richard Scheibe. 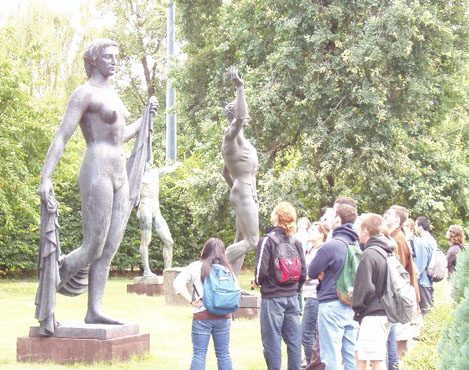 The American visitors at the Breker Museum. On the left is the bronze portrait of Konrad Adenauer. On the right, the large bronze relief "Kameraden". The work was made for the city of Berlin.

One of the students in the group said: "We like more and more the classical tradition in art, since we are spread over with abstract and so called modern art". And a girl added: "There is a good reason why people like the ancient art, and especially the architecture and art of the Ancient Greece. This kind of art is aesthetic, harmonic, and just simply beautiful."

The curator J.F.Bodenstein invited the students to come again. Many more Americans should visit Germany. Most of the people here in Germany are true friends of America. "We will not forget what good things the United States has done for the Germans after the Second World War, and politically, we are on their side since the time of our first Chancellor, the practising Roman Catholic Konrad Adenauer," said the curator.