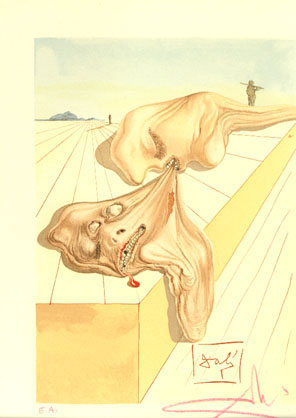 'THE IMPERSONATORS', woodcut # 30 by Salvador Dalí illustrates PART 6 of the six-part series on Dante's INFERNO.

(30) Dante speaks to two of these souls. Just as the second finishes speaking, two ravenous spirits come racing through the pit. One of them sinks his tusks into Capocchio's neck, and drags him away like prey. His companion identifies the two, who will run ravening through the pit through all eternity, snatching at other souls and tearing them apart. These are the EVIL IMPERSONATORS, falsifiers of persons. In life they seized upon the appearance of others, and in death they must run with never a pause, seizing upon the infernal apparition of these souls, while they in turn are preyed upon by their own furies.

Next appears Master Adam, one of the COUNTERFITORS, falsifiers of money. Like the alchemists, he is punished with a loathsome disease. He cannot move from where he lies, and his disease is compounded by other afflictions, including an eternity of unbearable thirst.

(31) Dante's spirits rise again as the poets approach the central pit, a great well, at the bottom of which lies Cocytus, the Ninth and final circle of Hell. Through the darkness, Dante sees what appears to be a city of great towers. As he draws near, he discovers that the great shapes he has seen are the Giants and Titans, who stand perpetual guard inside the well with the upper halves of their bodies rising above the rim.

One of them is Nimrod, the builder of the Tower of Babel. These are the sons of earth, embodiment of elemental forces unbalanced by love, desire without restraint and without acknowledgment of moral and theological law. They are symbols of the earth-trace that every devout man must clear from his soul, the unchecked passions of the beast. Raised from the earth, they make the very gods tremble. Now they are returned to the darkness of their origins, guardians of earth's last depth. 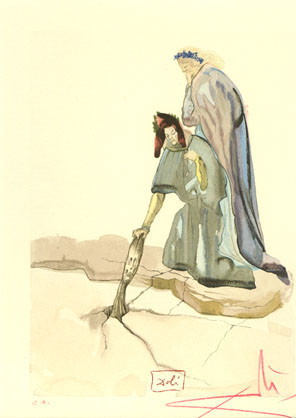 'THE TRAITORS', woodcut # 32 by Salvador Dalí illustrates PART 6 of the six-part series on Dante's INFERNO.

(32) At the bottom of the well Dante finds himself on a huge frozen lake. This is Cocytus, the Ninth Circle, the fourth and the last great water of Hell. Here, frozen in the ice, are punished sinners guilty of treachery against those to whom they were bound by special ties. The ice is divided into four concentric rings marked only by different positions of the damned within the ice.

This is Dante's symbolic equivalent of the final guilt. The treacheries of these souls were denials of love and of all human warmth. Only the remorseless dead center of the ice will serve to express their natures. As they denied God's love, so are they furthest removed from the light and warmth of His Sun. As they denied all human ties, so are they bound only by the unyielding ice.

The first round is called Caina, named for Cain. Here lie those who were treacherous against their relatives. They have their necks and heads out of the ice and are permitted to bow their heads&emdasha double boon, since it allows them some protection from the freezing gale and allows their tears to fall without freezing their eyes shut.

The second round is Antenore, named for Antenor, the Trojan who was believed to have betrayed his city to the Greeks. Here lie those guilty of Treachery to Country. They, too , have their heads above the ice, but they cannot bend their necks, which are gripped by the ice. The poets move on, and discover two heads frozen together in one hole. One of them is gnawing the nape of the other's neck.

(33) In reply to Dante's exhortation, the sinner who is gnawing his companion's head look up, wipes his bloody mouth on his victim's hair, and tells his harrowing story. He is Count Ugolino and the wretch he gnaws is Archbishop Ruggieri. Both are here for treason. In life they had once plotter together. Then Ruggieri betrayed his fellow-plotter and caused his death, by starvation, along with his four sons. In the most dramatic passage of the Inferno, Ugolino details how their prison was sealed and how his sons dropped dead before him one by one, weeping for food. And now, the killer-by-starvation becomes the food of his victim.

The poets leave Ugolino and enter Ptolomea, so named after the Ptolomaeus of Maccabees, who murdered his father-in-law at a banquet. Here are punished those who were Treacherous Against the Ties of Hospitality. They lie with only half of their faces above the ice and their tears freeze in their eye sockets, sealing them. Thus, even the comfort of tears is denied them. Here Dante discovers the terrible power of Ptolomea: so great is its sin that the souls of the guilty fall to its torments even before they die, leaving their bodies still on earth, inhabited by Demons. 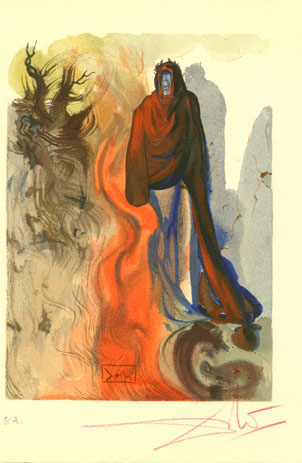 'THE APPEARANCE OF DIS, THE KING OF HELL', woodcut # 34 by Salvador Dalí illustrates PART 6 of the six-part series on Dante's INFERNO.

(34) The poets continue, and there, before them, they see Satan in the distance, his great wings beating like a windmill. It is their beating that is the source of the icy wind of Cocytus, the exhalation of all evil.

All about him in the ice are strewn the sinners of the last round, Judecca, named after Judas Iscariot. These are the Treacherous to Their Masters. They lie completely sealed in the ice, twisted and distorted into every conceivable posture. It is impossible to talk to them, and the poets move on to observe Satan.

He is fixed into the ice at the center of which flow all the rivers of guilt; and as he beats his great wings as if to escape, their icy wind only freezes him more surely into the polluted ice. He has three faces, each a different color, and in each mouth he clamps a sinner whom he rips eternally with his teeth. Judas Iscariot is in the central mouth. Brutus and Cassius are in the mouths on either side.

Having seen all, the poets now climb through the center, grappling hand over hand down the hairy flank of Satan himself. Finally, when they have passed the center of all gravity, they emerge from Hell. A long climb from the earth's center to the Mount of Purgatory awaits them, and they push on without rest, ascending along the sides of the river Lethe, till they emerge, just before dawn on Easter Sunday, once more to see the Heaven's stars.

… The END of 'INFERNO', Part I of the DIVINA COMEDIA by Dante Alighieri.