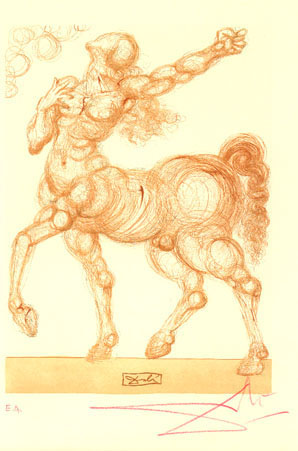 (25) Vanni, one of the sinners in this place, is in a great rage and he hurls an ultimate obscenity at God. The serpents immediately swarm over him, driving him off in great pain. The Centaur, Cacus, his back covered with serpents and a fire-eating dragon, also gives chase to punish the wretch.

Dante then meets the souls of five THIEVES of Florence and sees the further retribution visited upon the sinners. Some of the thieves appear first in human form, others as reptiles.

The endless and painful transformation is the final state of thieves. In life they took the substance of others, transforming it into their own. So in Hell their bodies are constantly being taken from them, and they are left to steal back a human form from some other sinner. Thus they waver constantly between man and reptile, and no sinner knows what to call his own.

(26) Dante turns from the Thieves toward the EVIL COUNSELORS of the next ditch. They are a moral symbolism, all men of gift who abused their genius, perverting it to wiles and stratagems. The poets move on, and Dante observes the inhabitants of this eighth ditch in detail. Here the evil counselors more about endlessly, hidden from view inside great flames. Their sin was to abuse the gifts of the Almighty, to steal his virtues for low purposes. And, as they stole from God in their lives and worked in hidden ways, so are they stolen from sight and hidden in the great flames which are their own guilty consciences.

(27) The double flame enveloping a sinner departs at a word from Virgil, and behind it appears another one, which contains the soul of another great sinner. He too wants to hear news of his former war-torn country, and Dante replies with a tragic summary of how things stand in the cities of Romagna. When he is finished, he asks the sinner for his story, and he recounts his life and how one of the Popes persuaded him to sin. 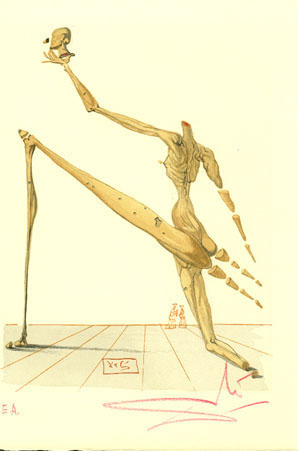 (28) The poets come to the edge of the ninth ditch, and look down at a parade of hideously mutilated souls. These are the SOWERS OF DISCORD, and just as their sin was to rend asunder what God had meant to be united, so are they hacked and torn through all eternity by a great demon with a bloody sword. After each mutilation the souls are compelled to drag their broken bodies around the pit and to return to the demon, for in the course of the circuit their wounds heal in time to be inflicted anew.

Among them, Dante distinguishes three classes: SOWERS OF RELIGIOUS DOSCORD, with Mahomet as the chief among them. Next come the SOWERS OF POLITICAL DISCORD. Last of all are the SOWERS OF DISCORD BETWEEN KINSMEN. These are represented by Bertrand de Born. He separated father from son, and for that offense carries his head separated from his body, holding it with one hand by the hair, and swinging it as if it were a lantern to light his dark and endless way. 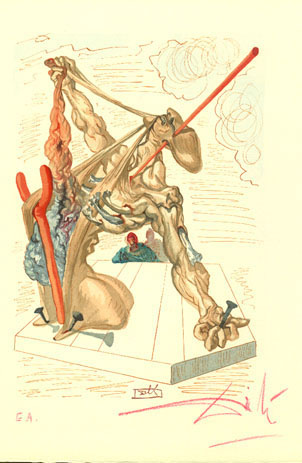 'THE FALSIFIERS', woodcut # 29 by Salvador Dalí illustrates PART 5 of the six-part series on Dante's INFERNO.

(29) Virgil now hurries Dante on to continue the journey. The poets now look into the tenth and last ditch of the Eighth Circle of Hell, and here they see the FALSIFIERS. They are punished by afflictions of every sense" by darkness, stench, thirst, filth, loathsome diseases, and a shrieking din. Some of them run ravening through the pit, tearing others to pieces. Just as in life they corrupted society by their falsifications, so in death these sinners are subjected so a sum of all corruption. Dante distinguishes four classes of falsifiers and in this canto we meet the first one, THE ALCHEMISTS, the falsifiers of things.