Dante at the Gate of Dis 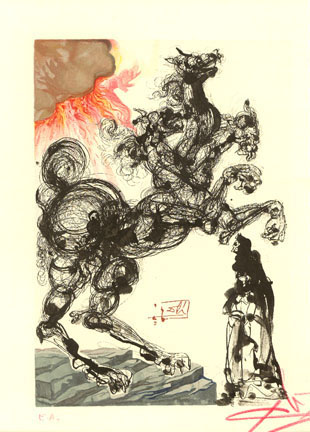 (6) Dante regains consciousness, and finds himself in the Third Circle. A great storm, continuously dropping stinking snow and freezing rain forms slush on the ground. The souls of the damned lie here in the icy paste, like in a garbage dump. Cerberus, the three-headed dog of Hell, stands guard over them, ripping and tearing them with his claws and teeth.

These are the GLUTTONS. In life they misused God's gifts and only wallowed in food and drink, and produced only garbage and waste. Now they will lie here through eternity, just like garbage, with Cerberus as their tormentor.

(7) The poets enter the Fourth Circle, and find a big fight in progress. The sinners are divided into two raging mobs, each soul straining madly at a great boulder-like weight. The two mobs meet, and continuously clash their weights against one another.

One mob is made up of the HOARDERS, and the other of the WASTERS. In life, they lacked all moderation and thought of nothing but money.

The poets continue their journey, and reach the Black Spring. It bubbles murkily over the rocks to form the Marsh of Styx, which is the Fifth Circle.

Across the marsh they see countless souls attacking one another in foul slime. These are the WRATHFUL and the SULLEN.

(8) The poets stand at the edge of the swamp, and a mysterious signal flames from a great tower. Soon enough, Phlegyas, the Boatman of Styx, races toward them across the water. As they are crossing the marsh with him, a muddy soul rises before them. It is one of the WRATHFUL.

The boat moves on, and now they see the flaming red towers of Dis, the Capital of Hell. Phlegyas deposits them at a great Iron Gate, which is guarded by the REBELLIOUS ANGELS. These evil creatures refuse to let them enter. Only with Divine Aid could they possible continue their journey. Virgil sends up a prayer for assistance, and anxiously waits for a Heavenly Messenger to appear.

(9) While waiting at the Gate of Dis, Virgil tries to hide his own anxiety from Dante. To add to their terror, Three Infernal Furies appear on a near-by tower, from which they threaten the poets, and call on Medusa to come and change them to stone.

At this moment of greatest anxiety, a storm shakes the air of Hell&emdashthe Heavenly Messenger is majestically approaching, looking neither to right nor to left. With a touch he opens the Gate of Dis, and then returns as he came.

The poets enter the gate, and find themselves in the Sixth Circle. The landscape is like a cemetery. All kinds of tombs surround them, each with its lid lying beside it, and each wrapped in flames. Cries of anguish sound endlessly from the entombed dead.

They are the HERETICS of every cult: the ones who offended God by denying immortality. 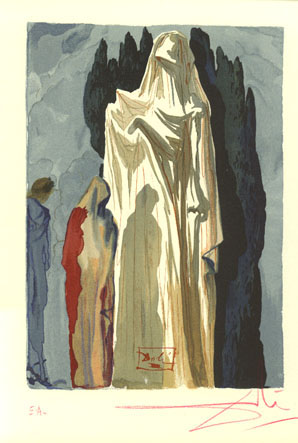 (11) Continuing the journey, the poets reach the inner edge of the Sixth Circle and find a great jumble of rocks&emdashresult of the great earthquake that shook Hell when Christ died. Below them lies the Seventh Circle. The air is so foul that the poets seek shelter behind a great tomb, until their breaths can grow accustomed to the stench. Virgil now outlines in detail the division of the Lower Hell:

a) Sins against Neighbors (Murderers and war-makers)

b) Sins against Self (Suicides)

c) Sins against God, Art, and Nature (and Usury one of them)

3) Treachery against guests and hosts

4) Treachery against lords and benefactors

As Virgil concludes is explanation, he rises and urges Dante on.