Remembering the multi-talent with an art exhibition in museum 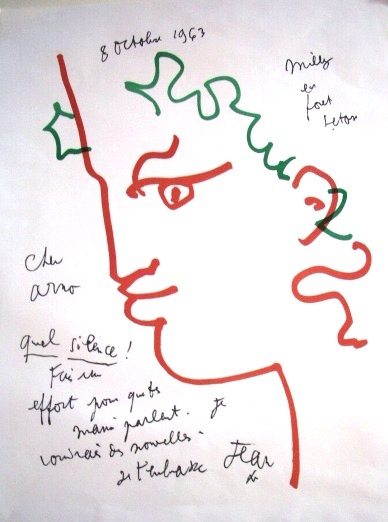 Of timeless beauty and harmony are the Orpheus images in the original graphics of Jean Cocteau. The picture shows a color lithograph with the head of Orpheus, produced in Paris by Fernand Mourlot. Added by hand is additional text by the poet. Mourlot was also the master-printer of Picasso, Chagall, Miro and Dalí.

Berlin/Köln (bpb) To honor the French multi-talent Jean Cocteau, the European Art Foundation proclaimed the year 2013 to be a "Cocteau Year". Remembering the year of his death in 1963, the Museum of European Art at the Noervenich Castle near Cologne in Germany, will unveil an exhibition of graphics and art objects. In the center is the Cocteau Collection of the German collectors Wolfgang Werth and Helmut Nüske. The exhibition will be opened in May, 2013. The title is "Jean Cocteau: Je reste avec vous". "We will show the various aspects of a universal genius", says Helmut Nüske.He and his colleague have collected and preserved the exhibition objects over the past decades.

People interested in the exhibition can make reservation already now, e-mail: schloss-noervenich@gmx.de . Only invited guests will be admitted to the opening ceremony. As part of the exhibition, also original graphics, art prints and publications will be available for purchase, in order to keep the the life and work of this great Frenchman in the public's memory, and especially of the young generation. The proceeds will be used for future cultural work in Europe.

„Je reste avec vous" is also engraved on the tomb of Jean Cocteau in the chapel of Milly la Foret. The assurance "I remain with you" was written by hand of the poet and writer. Jean Cocteau (1889-1963) was one of the multi-talented artists and intellectuals of the 20th century. Under the influence of the various artistic movements, he authored in France novels and theater plays, wrote libretto for Stravinski, designed ballets, created fimls with cultural potential and made talented drawings. Myths and the irrational side of the psyche play a great role in his work. He was well acquainted and frriends with the great personalities of his time: with Pablo Picasso, Arno Breker, Edith Piaf, Man Ray, Aristide Maillol. With Jean Marais, his life companion, he made films that are immortal. Unmistakeable and magical is his graphic work, which up to this day has lost nothing in its power of attraction. Cocteau was fascinated with the Orpheus theme: he wrote an Orpheus theater play and a fascinated film as well. Cocteau was possessed by the idea, that every poet lives in the fourth dimension: above all, Orpheus and he himself. The model for his unmisteakeable portraits of the young Orpheus was Jean Marais, one of the most beautiful and noble actors of his time. And so his visible model melted with the mythological Orpheus of antiquity to form a timeless work of art in drawings, paintings and original graphics of Cocteau.