The painter, illustrator and author died at 72 years 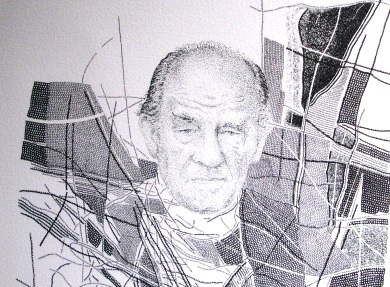 Typical for the artist Georg Cadora wewe his drawing-ink paintings, in which he put together thousands of small circles to make a composition. In this strenuous style was also created the portrait "Arno Breker", who was the most significant sculptor of the classical tradition in the 20th century. In Cadora's cycle of portraits of significant contemporaries, poets, writers and composers predominated.

Wuppertal/Saarbrücken (bpb) The painter and illustrator Georg Cadora is dead. He died at the age of 72 years on New Year's eve in 2012 in Wuppertal, Germany. According to medical reports, he died of cancer.

Earlier, he lived and worked a number of years also in Saarbrücken. Born in 1939 in Darmstadt, the Rhineland was for Cadora his "chosen place to live in". Here he met in 1973 the sculptor Arno Breker. The renowned photographer of prominent personalities Karlheinz Bast (from Bonn) arranged the meeting of the two. Cadora made a portrait of Breker, as well as of the sculptuor Gerhard Marcks, who then lived in Cologne. At the same time, a lithograph of Breker's portrait was created by Fernand Mourlot in Paris for Marco Publishers (Bonn) in a limited and signed edition ( www.galerie-marco.de ). Georg Cadora was a many-sided and inquisitive artist. He maintained contacs among others to Salvador Dalí and Henry Miller. He made various study journeys, and in his young years led and adventurous life in Europe and on the American continent. And also several visits to Africa and Asia. But throughout his life, Cadora remained a Francophile. According to his own admission, he earned the money for his studies as a waiter in Paris, and later in South America "as a trapper, dock worker, collector of beetles , hunter of birds of prey and grave digger". During all this time, he made drawings with drawing-ink his circles. Each of his many portraits of poets and artists consisted of thousands of tiny squiggles and loops. This was his area of specialization. Hs works have been widely shown to the public in many one-man as well as in group exhibitions. To these belonged among others also an exhibition in the Lehmbruck Museum in Krefeld, the opening of which was attended by Arno Breker.

The Museum of European Art at the Noervenich Castle near Cologne in Germany has placed a portrait of the deceased artist on exhibition for three weeks. The European Art Foundation ( www.europaeische-kultur-stiftung.org ) has accepted one of these lithographs into its collection. "This is a contribution to keep the memories of Georg Cadora alive for the future", explained Consul B. John Zavrel, director of the EKS for international cooperation.