The inventor of the heart pacemaker remains unforgotten 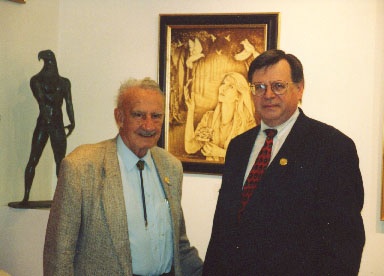 The inventor and researcher Dr. Wilson Greatbatch with Consul B. John Zavrel. Both of them were bound by a lifelong friendship. Their cooperation resulted among others in the existence of the "Museum of European Art" in Clarence, New York", in the service of the transatlantic cultural work between the USA and Europe.

New York/Berlin (bpb) He has prolonged the lives of millions of people by the invention of the implantable heart pacemaker: Wilson Greatbatch. Up to now, millions of people around the world benefited daily from this great technical achievement of the scientist, who was born on September 6, 1919 as son of a builder who was born in England. His 100th birthday anniversary is another occasion to remember this American citizen, who was tireless and full of ideas.

"He was a great man, who in spite of all his merits for scientific research remained humble and modest", remembers Consul Zavrel today in an interview. As a young student in his Czech homeland, he got to meet the American on one of his trips to Europe. "At the time, after the Second World War I had the good fortune to get support from this friendly US citizen, as I strived to get a US student visa." From this decisive encounter has developed a friendly cooperation.

In an interview with Wilson Greatbatch many years ago with the author of this commemorative article, the US inventor explained his position toward Europe. He made it clear, that he disagreed with every war and quarrel with the "old homeland Europe". Still, in his youth he had fought against the German Reich and its allies; he saw it as a duty to his nation. "So, that much more I loved to contribute to the dialog with civilians after the end of the war. Reason and the common ideals will bring us farther", he said. "And so I have also met John (Zavrel). From this has developed a respectful, good kind of father-son relationship."

Wilson Greatbatch died on September 27, 2011. In the 92 years of his eventful life as inventor, he has registered some 325 US patents. The most known invention is not only the implantable heart pacemaker, but the necessary lithium battery which powers it and does not corrode. As seen today, due to these inventions after overcoming the formerly impossible problems, the implanting of heart pacemakers under local anasthesia became widely seen as a routine operation. But it is not as simple as one imagines! Until his last days of his life, Greatbatch was occupied with ideas whose realization were meant to help the people.

The carreer as inventor began for Greatbatch during the Second World War in the US Navy, where he repaired electronic parts on a destroyer, as well as a radio operator being sent to Iceland on accompanying ships. Later he taught at a radar school and finally served as rear gunner in bomber operations. After the war he worked for one year as a telephone installer, before he began his study in electrical engineering at the Cornell University. For the financing of these studies, the father of three worked at a radio station as well as electrical engineer on the radio telescope of the university.

After he received a Master's degree in electroengineering (M. Sc. Electronical Engineering), he became a manager of the electronic division of the Taber Instrument Corporation in Buffalo. At the same time he founded his own business, since the company had no interest in his pacemaker.

Greatbatch often turns down the praise as being the "inventor" of the heart pacemaker, since others befor him were researching this problem as the theme of their research. But the success was only finalized when he succeeded in the jump from the theory of a refrigerator-size machine to a "handy, small model of the size of a match box." Soon after this he also developed the right battery as its source of energy. The result was perfect! 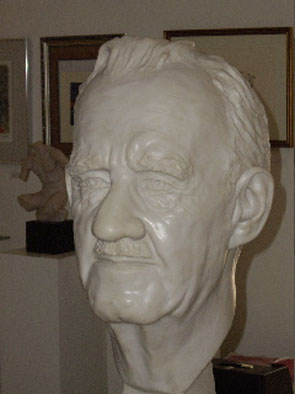 In all the highs and lows of his life, Greatbatch remained a man with the sense of appreciation for art, culture and tradition. His wife Eleanor, with whom he had five children, has always stood by his side. And in the last decades also culminated the cooperation with the diplomat, publisher and author B. John Zavrel. With his encouragement and support, the first "US Museum of European Art" (near Buffalo, New York) came into being. It is located on the main road from New York City, over Buffalo to the Niagara Falls in Canada.

Attached to the museum is an "Alexander Garden" as open-air exhibition space for art objects. The complex serves as a communication point for the transatlantic dialog about culture and society. Wilson Greatbatch was for many years also "Grandmaster" of the "Alexander-Order pour le Mérite for Art and Science". In this capacity he was the successor of the French writer Roger Peyrefitte (Paris). "That Wilson Greatbatch, in the course of his life, would be covered with other honors cannot be ruled out", says Consul Zavrel. "But what is important for us is that this great and modest personality remains to be considered as an example for a free and responasible present and future. This hoimmage to his 100. birth anniversary is a good occasion!"