An objective engagement for the great sculptor is honored 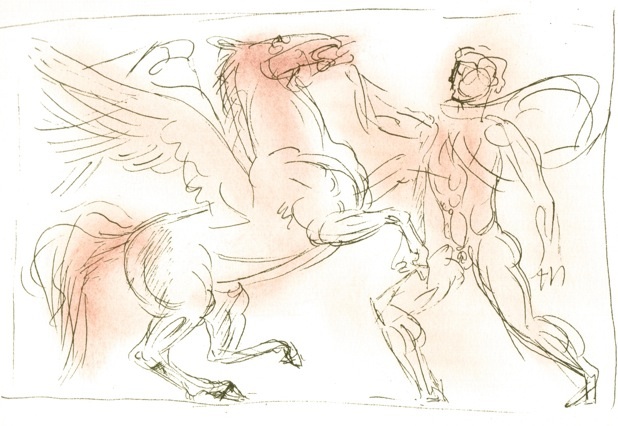 „Pegasus and Bellerophon" by Arno Breker. For this original lithograph, Breker takes the theme of the winged horse Pegasus and the hero from the Greek mythology. Realism and abstraction are united in this composition for a new interpretation of the classical theme.

Berlin/New York (bpb) The „Arno Breker Gesellschaft 1979 e.V." has elected in May 2012 its new officers. Its present President Sigurd K. Kuepper and his deputy Thomas Blumann were confirmed in their posts for another term. At the meeting in the "Arno Breker Museum" at the Noervenich Castle near Cologne, Germany one of the participants praised in the name of all members the "objective and expert engagement of the presidium for a sculptor, graphic artist and architect who belonged to the most significant personalities in art of the 20th century".

At the meeting were present also several artists, as well as the former President Uwe Möller from Stuttgart. He was a close friend of Breker and had led the Society honorably for many years. The art expert continues his engagement as the chief editor of the Arno Breker Newsletter. ( www.museum-arno-breker.org)

The assembled members supported the engagement to strengthen the information work of the Society. Especially, university students should be provided with materials for their scientific articles, masters and doctoral thesis, or lectures about the artist's life and work. At the same time it is to be recognized that the artist stood in the spotlight of political events during his "Classical period" from 1939 to 1946.

Offer of information for the media and students

The Arno Breker Gesellschaft should recommend eyewitnesses to interested journalists and book authors, in order to contribute in a meaningful way to a well-supported research. The Arno Breker Society in New York promised to support these goals by its activities in the United States and Canada. It suggested to offer small information exhibitions about the life and work of Arno Breker to interested circles such as schools, universities, auction houses and art organizations. Requests for informations should be directed by e-mail to: Marco-VG@t-online.de

In addition, also information about the unique friendship of the three artist friends&emdashSalvador Dalí, Arno Breker and Ernst Fuchs&emdashshould be made widely available.

An important note: Questions by art collectors about certificates of authenticity regarding Breker's sculptures, drawings and original graphics will be passed on by the ABG to the appropriate places, such as the Breker Archives or the publisher of his graphic works.