A friend of reconciliation in Europe and of the expelees

Otto von Habsburg at a lecture. He died on July 4, 2011 at the age of 98. The son of the Austrian Kaiser has been engaged as a Christian politician for the development of democracy in Europe. After the downfall of the Austrian Empire, he was already as a young man a good example of how to participate in forming a society in freedom.

Berlin/New York (bpb) Otto von Habsburg is dead. The son of the last Kaiser of Austria and King of Hungary died in the morning of July 4, 2011 at the age of 98 years in Germany. In his house in Pöcking on the Starnberger Lake (Bavaria) were with him, according to information from his office, all his seven children. „He passed away peacefully", said a member of the family. His wife Regina von Habsburg had died in February of last year.

Otto von Habsburg lived during World War II in exile, mostly in America and the United States. After 1945 he ruturned back to Europe, and became engaged for the unification of the continent. The Alexander Order pour le Mérite (OAG) declared in the United States on the occasion of the death of its honorary member that the Kaiser's son "has remained, in a century of wars in Europe, a great human personality". He has been appreciated by millions of men and women in Western and Eastern Europe as a man who worked after 1945 for the unification of Europe, and for reconciliation of the German population with the Slavic peoples, as soon as Poland and Czechoslovakia were freed from the communist regime.

From the countless declarations, messages of condolences and recognitions on the death of Otto von Habsburg, one should be pointed out here for its special truthfulness: the official proclamation of the President of the German Expelees, Erika Steinbach.

A friend of the expelees and refugees

The statement of the member of the German Parliament in Berlin, who has been attacked because of her engagement for the historical truth, especially with respect to Poland and Czech Republic, has the following text:

He supporterd since the very beginning the goals of our non-profit foundation CENTER AGAINST EXPULSIONS, and was a member of the jury for the award of the 'Franz Werfel Award for Human Rights'. For his merits on the behalf of the Expelees, the Union of Expelees awarded him in 1976 its highest decoration, the Plaque of Honor.

Otto von Habsburg was a decisive opponent of National Socialism and and early fighter for a united Europe; for that he worked already during World War II. As a member of the European Parliament, he was engaged for the rights of minorities and for the right of self-determination of people. This way he also became an understanding partner of the Expelees. He energetically turned against expulsion and against notions of collective guilt.

With his world-wide political experience, his numerous contacts and his enormous expert knowledge in many fields, we will miss him! To his bequest to us belong the many remarkable and deeply penetrating fundamental speeches and lectures, with which he was preparing and forming the unification of Europe. Otto von Habsburg was a personality that is hard to replace. His death is a great loss." 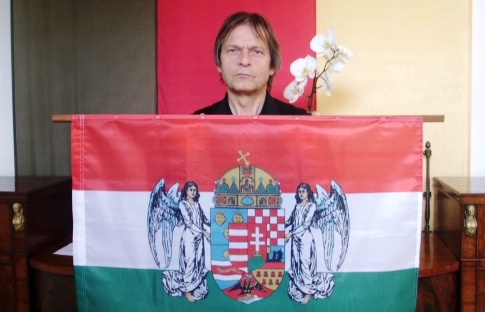 In Germany, people widely participated in commemorating the death of Otto von Habsburg.

Books of condolences have been set up, like here at the Museum Europäische Kunst at the Nörvenich Castle near Cologne. The photo shows the Hungarian composer Lajos Tar on July 4, 2011, the day when the one-time successor to the throne died. The guitar player and composer set up an 'Altar for Condolences." To this belonged the flag with the coat-of-arms of Hungary. On September 24, 2011 Lajos Tar will give a guitar concert at the Nörvenich Castle (schloss-noervenich@gmx.de)