Loved, esteemed and reviled, but not forgotten after a 'Life for the Beautiful' 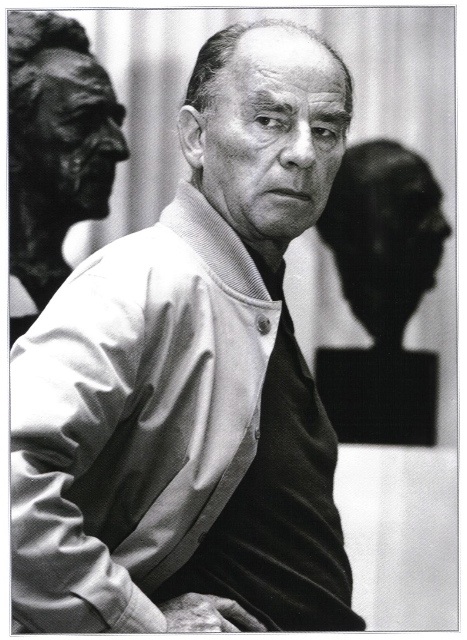 Dynamic and sporty: the sculptor Arno Breker, 1973. The photo was taken in the atelier of the artist.

Berlin/New York. (mea) Arno Breker: the 20th anniversary of his death! The end of his life journey two decades ago is an occasion for a special commemoration of his loyal followers in the United States, Germany and France. On the day of the funeral, the French writer Roger Peyrefitte proclaimed in 1991 in the chapel at the cemetery: 'All of France bows in front of Arno Breker. We bow in front of you, dear Arno!' Wreaths froom Germany and abroad decorated the entrance of the chapel. The young Olympic swimmer Walter Kusch spoke a 'Salute of the Youth'.

In the funeral procession from the chapel to the grave were among others the art patron Dr. Peter Ludwig and his wife Prof. Dr. Irene Ludwing (Cologne, Aachen). The 96-year old writer Ernst Jünger and a friend from the 'Paris time of the 1940s' sent a magnificent wreath of flowers. Arno Breker's coffin was decorated with while lillies.

Passed away peacefully: 'Kissed by angels'

The sculptor of the century, Arno Breker, took his farewell in the night from the 12th to 13th February, 1991 in Düsseldorf. 'Heart failure', was the diagnosis. There was a faint smle on his face. The Israeli writer Ruth Zucker, who is today 95 years old, said at the time about this peaceful passing away: 'Arno Breker was kissed by angels and carried away to the Paradise."

The Alexander Order pour le Mérite, whose member Breker was, wrote it its death notice in Latin: 'He died, mourned by many righteous people".

February 13th is also the day on which Richard Wagner died, with whose musical oeuvre and his legendary daughter-in-law and the 'High Lady' of Bayreuth, Winifred Wagner, Arno Breker was bound by very close ties.

February 13th is also the day of birth of Ernst Fuchs. The painter-prince and Salvador Dalí formed with Breker the 'Golden Triangle' of the three artist friends. 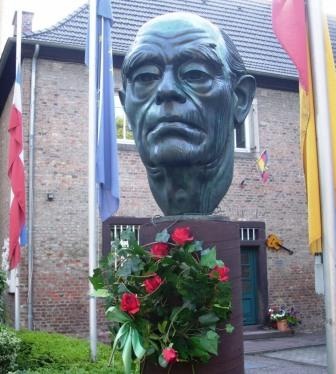 A eye-catcher for the museum visitors: The „Breker Monument" at the Nörvenich Castle near Cologne. The monumental bust of Arno Breker by M. Donst (Berlin) is up to now the largest portrait-bust of the artist. After the winter break, the Museum re-opens on May 1, 2011. Information and book lists can be obtained free of charge by e-mail from: Schloss-Noervenich@gmx.de

Today, two decades after the death of the most significant sculptor of the Classical tradition, three institutions are devoted to serving the life work of Arno Breker: His Museum at the Nörvenich Castle, the Arno Breker Gesellschaft (ABG) Deutschland, the Arno Breker Society International (ABSI) and the US Museum of European Art in New York.

And to this are added visionary publishers and publicists, like the by now elderly Breker's publisher , Joe F. Bodenstein. He and his colleagues have brought about a 'Breker Renaissance' after the 'Downfall' by distributing printed materials, by organizing and arranging the presentations of his works of art in countless exhibitions in Europe, Japan and America. The only deplorable thing is that after the death of the Master, the material and spiritual heirs of this art-genius do not cooperate as well as they should in order to promote the artistic legacy of Arno Breker. In this way, a kind of 'Time of Forgetting' has begun. The political enemies of the artist can be filled with joy, seeing that a part of the old followers are engaged in feuds.

Criticism, hate and envy continue after the death

The figure of Arno Breker and his artistic work in the 'Third Reich' is disccussed with controversy even today, in the year 2011. The accusation of the official artistic organizations in the Federal Republic of Germany still continues to run in 2011 along these lines: 'Arno Breker has as the favorite sculptor of Adolf Hitler served the Nazi regime." The monumental bronze figures and reliefs for the planned re-design of Berlin according to Hitler's plans as well as those of his chief architect and later armaments minister Albert Speer also continue to be among the most admired works of Anro Breker around the world.

Hardly any attention or consideration has been given to arguments on the behalf of Breker, such as: Breker was fatefully drawn into the 'Spotlight of Politics' due to his great artistic work.

Finally, according to eye witnesses, Arno Breker submitted to his 'fate' after 1945. He concentrated primarily on his artistic work. At the same time, he avoided legal quarrells and lawsuits, in order not to wast his valuable time for this art of the 'New School'. In this way, aftert the Second Word War, a series of portrait-busts of important personalities was created. To this was added a manifold body of work of new bronzes for art collectors as well as an impressive body of graphic works. Today, many books and catalogs inform about the life and work of the artist.

The attacks against Breker after the end of the war have always come above all from the contemporary artists and intellectuals. Many of them have been motivated by 'envy of the successful'i or by 'sick hate'.

A book list with books and catalogs by and about Arno Breker can be ordered free of charge.In Europe, e-mail schloss-noervenich@gmx.de

In the USA and Canada, e-mail: zavrel@meaus.com (Books are in English, French and German).