30 years ago died the last daughter of the German Emperor and Lady Grandmaster of OAG
By B. John Zavrel 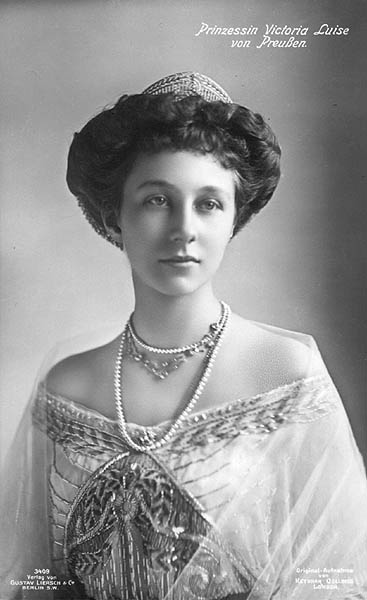 Berlin/New York (mea) The Alexander Order pour le Mérite has issued a proclamation on the occasion of the 30th annniversary of the death of the daughter of the German Emperor, Victoria Luise of Prussia (1892-1980). For many years, she was until after 1945 the Lady Grandmaster of the Alexander Order. Her motto was: Loyalty, Duty, Truthfulness.

The Proclamation of the leadership of the Order

The proclamation of the leadership of the Order and of the 'Secret Council' was published in New York on the occasion of the death anniversary on December 11, 1980. Following are excerpt from the proclamation:

"We remember a woman who has always been during all the phases of her times an example of responsibility, duty and readiness for self-sacrifice.

Her Imperial Highness has mastered also the low points of fate during the time of the German Empire, in the Weimar republic and in the times of National Socialism. The daughter of the last German Emperor has after 1945 supported with an open heart the democratic development of the Federal Republic of Germany under its first Chancellor Konrad Adenauer. At the end of her life at 88 years, many citizens were aware of the exemplary ways she has dealt with the painful experiences of her family.

As a participating eyewitness of two world wars in the 20th century, Princess Victoria Luise of Prussia has been rightly counted as a significant personality among the women of Europe. As a relative of the Queen of England and an ancestor of the Royal families of Greece and Spain, she was buried in 1980, with a great participation of the people, in the Roayal Mausoleum in the Garden of the Herrenhäuser in Hannover (Germany).We bow in this anniversary year before a woman who has lived the principle of hope and the self-appointed duty: To shape the future in today."

A house in the Odenwald Forest instead of a Palace

Princess Victorial Luise has published after 1945 a number of books about her life as the Emperor's daughter. These books were much in demand by the German people. Insights into the hardly known 'life as a citizen' of the old lady come from notes of the journalist Joe F. Bodenstein (Miltenberg am Main). We find there the following about the year 1959, when he interviewed her:

"The Highness came in the Odenwald Forest (Miltenberg District), in order to recover her health in the healthy forest air. But she made no fuss about it, since all should remain secret. I looked for her at the castle of the Prince of Leiningen in Amorbach. But the lord of the castle was not too talkative. No wonder, since the Princess preferred staying in the small forest house at the Waldleiningen Castle to a vacation stay at the princely palace. (My editor Rudolf Vierengel from the leading newspaper 'Bote vom Untermain' considered this very correct, since he guarded almost jealously that only he should deal with the Prince.)

As I then as a young fellow met the 67-year old princess in her 'Forester's house', she modestly noted: "I have lived enough in palaces. My interest is in the nature. The Odenwald Forest is the right place. And besides, here hardly anyone recognizes me. So I can roam the forests undisturbed."

In the following three weeks I have been often her companion. Although she said that she could "herself drive well a car", I preferred to drive her around in my Volkswagen."Princess, it is a great honor for me", I pointed out. In this way, I "carried away" the Emperor's daughter among others also into the district town of Miltenberg. On seeing the historical market square with centuries old half-timbered houses at the so-called Schnatterloch, she said enchanted: Here breathes history."

I was impressed, how modest the Princess was. For our trips she brought along slices of bread with butter or open-face sandwiches (that she made herself?). With them, we drank mostly peppermint tea from an old thermos bottle. Only very seldom did we go into an inn."

Already as a young woman in the Alexander Order

The OAG is pleased and proud that the Princess, already as a young woman of some 24 years, became a Novice of the secret Alexander Order pour le Mérite. In those days, it was an important step, since the circle was mainly reserved for men. The Princess remained attached to the Order also after the end of the monarchy. Later, she became Chancellor of the Order, and finally Lady Grandmaster"

Her son-in-law, the former King of the Hellenes (Greece), was in the time of the first German President Prof. Theodor Heuss the patron of the Order. King Paul was married to her daughter Frederike (Queen of Greece). In her turn, she is the grandmother of today's Spanish Crown Prince Felipe, the Prince of Asturias. The Prince received during his visit of the European seat of the Alexander Order at the Noervenich Castle near Cologne, Germany in 1991 the Honorary Membership of the Alexander Order, in the presence of the former German Foreign Minister Hans-Dietrich Genscher.

For information how to apply to become a Novice Member of the Alexander Order, please contact John Zavrel, Chancellor at zavrel@meaus.com

Also, the booklet ART OF OUR TIME is available for $ 5. This publication contains some fine art works for sale, connected to Alexander the Great.