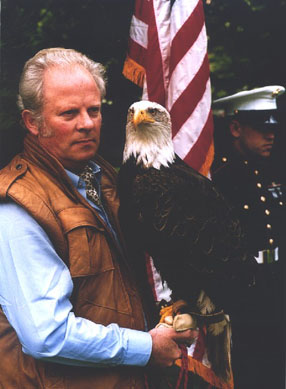 Horst Niesters, Knight of the Alexander Order. The photo shows the member of the honorary society with one of the 'White-headed eagles.' This eagle is also on the coat-of-arms of USA. Already years ago, the German Chancellor Helmut Schmidt made a gift of one such pair to the US President Ronald Reagan, who also belongs to the Knights of the Alexander Order.

New York/Paris/Berlin (bpb) The Order of Alexander the Great (OAG) has awarded Horst Niesters, the international photographer of wildlife and nature, with the Alexander Order Pour le Merite for Art and Science. The honor took place on Saturday, May 20, 2006 at a festive ceremony at the Noervenich Castle in Germany. Located near the ancient city of Cologne, the Castle is the European meeting place of the Order. Niesters is, among many other things, the founder of the Wildlife Preserve Hellenthal (info@wildgehege-hellenthal.de) .

This is what was emphasized in the laudatio: Mr. Horst Niesters is honored for his merits for wildlife, nature, ecology and for his engagement for understanding among nations. By activities to protect nature and to promote the breeding of various birds of pray that have been threatened by extinction, Niesters has made significant contributions to the preservation of the multiplicity of various species. As an internationally respected photographer of wildlife and nature, author and publicist, this cosmopolitan personality has masterfully preserved and made known to the wide public audience the rich multiplicity of the animal world. In this manner, he brings the beauty of creation to the people. And it is an important contribution to the promotion of ecological mindfulness in people of all ages, young and old.

The Chancellor of the Order, Consul B. John Zavrel said at the festive event: „Honorable Horst Niesters, we welcome you as a Knight of the Alexander Order Pour le Mérite for Art and Science with the task to continue to be engaged for humaneness, peace and understaning among nations".

The Alexander Order for Art and Science is an international society, which is dedicated to the spiritual ideals of Alexander the Great (356-323 B.C). To these ideals belong understaning among the nations, respect for human rights, tolerance, readiness to help, a social mindedness, the upholding of humanistic traditions in art, culture, science and teaching, as well as the mutual respect of the different religions. Every engagement of the Alexander Order is oriented toward the public spirit.

The Knights and the Circle of Friends of the Alexander Order