More than 200,000 visitors in the first two months 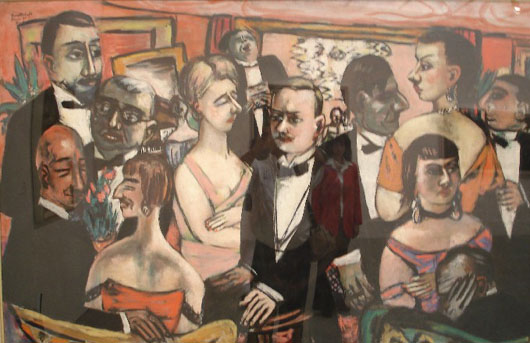 Find out who is the painter of this work: Society Party (detail). seen at the Guggenheim Exhibition in Bonn, Germany (former capital since Konrad Adenauer's time).

Bonn/New York (bpb) From July, 2006 till January 7, 2007 the Art and Exhibition Hall of the Federal Republic of Germany in Bonn presents one of its biggest and most ambitious exhibitions to date. A selection of 250 Modern and Contemporary masterpieces from the holdings of the Guggenheim Foundation are on view. With five museum locations in New York, Venice, Italy, Bilbao, Spain, Berlin, Germany, and Las Vegas, the Guggenheim Foundation is the first truly global institution devoted to visual art.

Consul B. John Zavrel, Director of the European Art Foundation Berlin and founder of the US Museum of European Art in Clarence has welcomed the cultural cooperation between USA and Germany. "The dialog of culture, art and science supports the dialog between the people. And this can be a contribution to international peace."

Following the tradition established by the famous Frank Lloyd Wright-designed museum building, erected between 1946 and 1959 on New York's Fifth Avenue, Thomas Krens, director of the Guggenheim Foundation since 1988, has commissioned many of the world's leading architects, among them Frank Gehry, Zaha Hadid, Jean Nouvel, Enrique Norten and Rem Koolhaas to design additional Guggenheim museums in Europe and the United States.