Recollections of the architect James Leefe

View of part of the Diablo Canyon Nuclear Power Plant on the California coast.

The subject of much controversy, any involvement with nuclear power is sure to stir concern. Diablo Canyon is no exception to this commonality. James Leefe's work was not involved with the use or construction of nuclear power facilities, but the machine shops and warehouse necessary to maintain the plant and store machinery, etc. The two buildings were constructed in 1986 and are carved, along with the rest of the site, on the coast of California, near San Luis Obispo.

The design is basically a large raised rectangle, when viewed from the top. This design is ingenious, however, in that it makes use of two concrete structures that comprise two long, separate rectangular buildings and are connected by a large metal cover between the two making an extremely large, unified machine shop. This 25,000 square foot building has two levels, with an extra 9,000 square feet of offices and storage. The entrance openings give the same feeling as an aircraft hangar, enormous on an atypical scale. The connecting top is designed with two semi-circular arcs emerging from the sides to provide ventilation and light; these raised areas run from one side of the building to the other, lengthwise, and cleverly appear as the shape of their namesake's primary feature, devil horns. 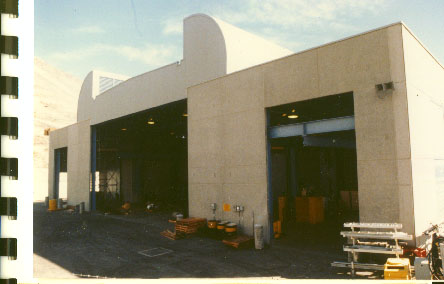 The machine shop of the nuclear power facility.

The warehouse building was a particular problem for planning in that its expansive size was a problem on the varying coastal terrain. It is built in different sections to maintain uniformity and adaptability given these terrain circumstances. The building has 95,000 square feet of storage on the ground floor and another 12,000 feet of office space on a partial second level. The second building takes on many similar characteristics of the first, but is covered almost completely with the metal sheeting that only covers the center of the machine building. The covering by this sheeting is rounded on many of the edges, intended to soften the profile of the building. The building's upper floors are stepped back away from the edge of the building's main walls and have windows, which overlook the ocean and thus aid in separating the otherwise industrial, non-human storage feature of the lower level.

The site is considered "highly visible", so the necessity of having a skilled architect who could create an environment that was not too compromising for the scenery and environment was essential. Even the exhausts are trapped so as not to release over the ocean and create an appearance of industrial or polluting wastes, which would affect the otherwise "clean profile."