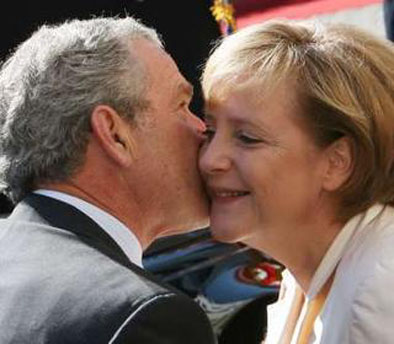 US President George W. Bush kissed the German Chancellor Mrs. Angela Merkel, when she welcomed him on his visit to Germany in July, 2006. A new way of demonstrating the American-German friendship.

Berlin (bpb) The US President George Bush was warmly welcomed by the German Government on his visit in Europe. Chancellor Mrs. Angela Merkel invited the guests to the state Mecklenburg-Vorpommern. She lives there, since she was born in the former DDR. During the Cold War, the state was a part of the communist ruled territory of East Germany.

All problems of the past seemed to be forgotten when Bush (60) arrived in Germany. He started at once kissing Angela Merkel (51, CDU) when they met. First Lady Laura Bush (59) did not mind, knowing that this is a game of politics. There was a flair of a Hollywood movie, when Merkel gave a barbecue party in honor of the President and the First Lady. "I like barbecues", said Bush. "I first met my wife at a barbecue party."

The president stayed at the five-star Hotel Kempinski in Heiligendamm. He got up at already at 4:30 in the morning. Then he went mountain biking in the forest, followed by 20 of his bodyguards.

Later, the German Chancellor Merkel welcommed the president officially: "We have much to be thankful for to the United States&emdashthat today we can live together in peace and freedom in one country!" Bush seemed to be pleased and replied, "From this region comes a outstanding lady Chancellor. I am proud to be able to call her a good friend. I have respect for her judgment and value her opinion

Merkel and Bush met for talks about the international political situation, including the situation in the Middle East and Israel, about the German-American relations and the Western dialog with Russia.

In the meantime, a special 'ladies program' was arranged for Laura Bush. She visited a library for children, and talked with 17 students. Afterwards, she visited the old Monastery Johannes, to look at its gold treasure--the so-called "Hiddenseer Goldschatz". As a souvenir, a gold-plated silver cross on a chain was presented to the First Lady.

The Bush visit did not make all Germans happy. Much criticised in public were the high security measures during the visit to Mecklenburg-Vorpommern. It is said that the two days of his visit cost the German taxpayers over 60 million dollars!! The German federal government will have to share these expenses with the economically poor state of Mecklenburg-Vorpommern.

George W. Bush did not get to see the real Germans. This is not at all possible on a state visit. So, he has not heard that the German Chancellor Angela Merkel has became very unpopular among the Germans. Some people hate her for her policies. Taxes are steeply increasing, there is unemployment and stagnation in all areas of the economy&emdashall this as a result of the great coalition between the Christian Democrats and the Social Democrats of the former Chancellor Gerhard Schroeder. 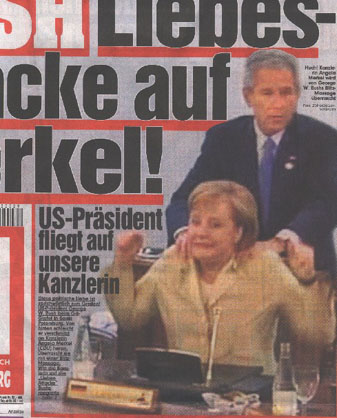 In spite of all the serious talks at the summit of the Group of Eight in St. Petersburg, the US President George W. Bush did not lose his sense of humor. He frightened the German Chancellor Merkel by sneaking up on her from behind and grabbing her neck. The famous European Newspaper Bild-Zeitung (Germany) published this photograph on Tuesday, July 18, 2006, giving the impression of a love attack. But all was really harmless. "It was just a joke", said a German diplomat.

After Germany, Bush visited St. Petersburg, Russia for the summit of the Group of Eight. The meeting went smoothly for President Bush. In his sixth summit with other world leaders, he showed a new appreciation for collegial diplomacy, experts said. At the meeting, the German Chancellor Merkel was the only woman among the world leaders. Bush left the summit showing progress on an agreement that will allow Russia to sell nuclear fuel to the United States, and later take back the spent radioactive waste and store it in Russia. With the Middle East violence overshadowing the annual meeting, Bush was not able to press the Russian President Vladimir Putin on the interest of US energy companies to get a piece of developing the massive Russian natural gas fields in the Barents Sea.

The United States and Russia were also unable to break the impasse over Russia joining the World Trade Organization. However, Bush was able to tone down the rhetoric from President Putin and the French President Jacques Chirac on the Middle East crisis. Both condemned Israel and called for a cease-fire. All considered, political observers say that it was a useful and a successful visit to Europe for Bush.