The sculptor Kurt Arentz has died. 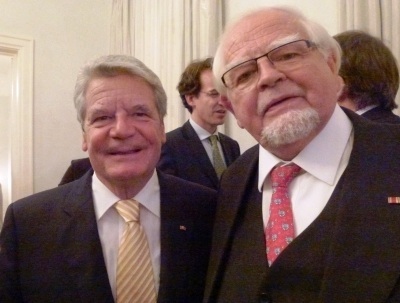 Memories of Berlin: Kurt Arentz (right) with German President Joachim Gauck in the Bellevue Castle. Arentz created the bust "German President Roman Herzog", which is part of the official "Galery of Ancestors of the German Presidents" in the Presidential office of the capital.

The internationally active sculptor Kurt Arentz (Leverkusen) is dead. From the information released from his atelier in Leverkusen, the artist passed away on Monday, June 23, 2014 in Munich. According to his physicians, he died of heart failure.

Arentz was born on May 30, 1934 in Cologne on the river Rhein. He departed three weeks after his 80th birthday. Dates for the funeral and a memorial service still have to be set, according to the sculptor's family.

Kurt Arentz was among others an artist-spokesman of the European Art Foundation (EKS) Germany and was in charge of the transatlantic cultural relations between Europe and the United States. The Museum Europäische Kunst Schloss Nörvenich has been showing for years in a permanent exhibition bronzes, paintings and graphics of the artist. To the exhibition articles belong portrait-busts of significant contemporary personalities (statesmen, representatives of business and society) as well as open-air sculptures. In addition, there is a significant body of work of small and large animal sculptures. They form the series 'Noah's Arch.'

The death of the artist has caused consternation and sadness also among art collectors abroad. This especially means the United States,Israel, France and Switzerland. Illustrious personalities whom he had portrayed live in these countries. The 'Museum of European Art' in USA (Meaus) has continuously exhibited works of Arentz, who has also immortalized the US Presidents Ronald Reagan, George Bush and Bill Clinton in bronze portrait-busts.

The Museum's director Consul B. John Zavrel honored the deceased as a "true friend and active supporter of the German-American relations". He "has enjoyed high esteem by the US Presidents Ronald Reagan and George Bush senior, who have always proved their loyalty in the political partnership with Germany". Arentz remains in respectful memory of all Americans whom he has met on his visits to the United States, pointed out Consul Zavrel.