Ukraine and Russia: new danger of war in Europe

Putin, the Crimea and taste for war is a bad play with fire

Commentary by B. John Zavrel 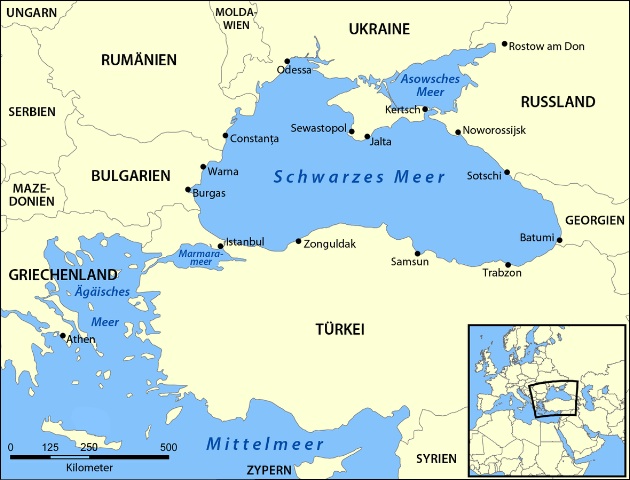 The Black Sea lies between Turkey, Russia, Ukraine and Greece. The peninsula of Crimea has always been a much coveted territorial prize. Its settlement history is thousand years old and covers antiquity, Roman times and up to the 21st century.

Moscow/Washington (bpb) New danger of war in Europe! This is a horror imagination after two bloody and destructive world wars of the developed countries in the 20th century. But this nightmare threatens to become reality. The saber-rattling of the Russian President Vladimir Putin began after the revolution in February 2014 in the Ukraine. What has happened? The people went into the streets and overthrew, at the price of their own victims, the pro-Russian government. The people spoke their will for closer ties of this formerly communist east-block country to the democratic west European states of the European Union. nd now Putin feels a loss of power and ordered "protective actions" of sending Russian military to the Crimean peninsula.

The reaction of the US President Barack Obama, the German Chancellor Angela Merkel and their allies worldwide have condemned this premature step as "attack on people's rights". Putin was several times begged and requested to return to reason. The solution of the problems can and must be found through direct political talks. It is now urgent to hope that the West will not be provoked to a military strike. That would be disastrous, since then the dispute could escalate to the use of nuclear weapons!

History: In order to understand this threatening development for Europe, America and for the whole world, one has to recall the history. In its history, Europe is a continent of wars, oppression, conquest and land grabbing. The epochs of the "golden years" of peace, well-being and positive development of technology and science in the interests of the people are rare.

Putins arguments for his willful and by nobody agreed-to actions are:

1) protection of the large number of Russian citizens on the territory of the Ukraine and the Crimean peninsula,

2) the securing of the access to the sea, across the Crimean peninsula, and

Catherine the Great conquered the Crimea

The Russian Empress Catherine the Great, who was born in Germany (1729 to 1796), had her statesman and field marshall Greigori Potemkin conquer the Crimean peninsula. She gave to her lover and dedicated counselor wide-ranging rights, also to the establishment of Russia's Black Sea fleet. The Empress proclaimed it on April 8, 1783 to belong "from now on and for all time" to Russia. This position was held by Russia during the last 231 years, during the various political systems in this vast empire, which is in 2014 ruled by Vladimir Putin.

The current agreement of the Ukraine with Russia regarding the stationing of the Russian Black Sea navy guarranteed its base on the Crimea until 2042. On the other hand, Russia assured the Ukraine among others favorable shipments of gas.

To summarize: the foundations for a peaceful and comprehensive conduct of affairs are thus well established. And there is also sufficient time over the coming 28 years that the agreement has still to run, to come to new agreements for the far future, which would serve the people of Russia, the Ukraine in an Europe of peace and cooperation. 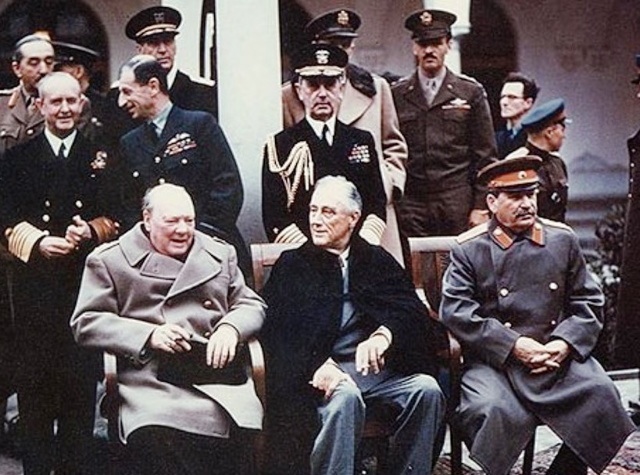 Remembering the history: The conference of Yalta (Crimean Conference) was a diplomating meeting of the Allied heads of state Franklin D. Roosevelt (USA), Winston Churchill (United Kingdom) and Josef Stalin (Soviet Union) . The main topics were the dividing up of Germany, the expulsion of Germans from their historical, ancestral settlement areas and the division of power after the end of the war. Stalin got the "lion share" for his communist regime.

Yalta Conference of the victors on the Crimea

The three victorious powers of the Second World War met from February 4 to 11, 1945 in the resort of Yalta, and thus created world history on the Crimea. The meeting became one of the most spectacular and cruel conferences of the 20th century. The political "leaders and powerful people" of the United States, Great Britain and the Soviet Union divided up the German Reich and other European states like a cake, The decision to expell all Germans from their centuries old homelands in Europe and to confiscate their properties was another inhuman deed. The greatest territorial grab was awarded to the communist dictator Josef Stalin. By this was made possible the following decades-long oppression of countries like Czechoslovakia, Poland, Hungary, Yugoslavia, Romania, Bulgaria and the Baltic states of Estonia, Latvia and Lithuania. According to impartial historians, this action by the Western Allies turned out to be a great mistake.