Remembering a genius who died 24 years ago 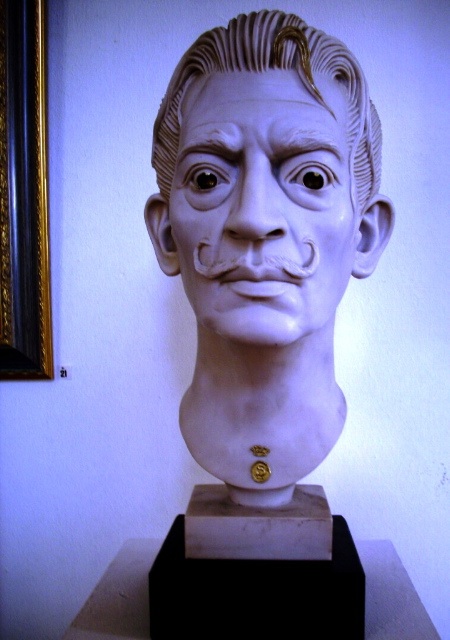 Salvador Dalí. Portrait by K. Donst. The life-size bust has been executed with the hair in the style that Dalí used to wear at the beginning of his friendship with Coco Chanel in Paris. The photo belongs to the „Royal Dalí Collection of the Museum Europäische Kunst (Noervenich Castle near Cologne, Germany).

Madrid/New York (bpb) Salvador Dalí exists in the unconscious of millions of people around the world. He was born on May 11, 1904 in the Spanish Figueres (Girona), Catalonia. So, his admirers can celebrate his 109th birthday anniversary in 2013. And on January 23, 1989 his successful, excentric and often scurrilous life came to an end. That was 24 years ago. For the contemporaries who had known him personally, in spite of all their respect, he remains "the crazy one from Cadaques".

There are only few artists in the Western culture about whom has been written as much as about Salvador Dalí. And so it is that in book publication he leads well ahead of Pablo Picasso, Marc Chagall and Jean Cocteau. And what is reported about him is entirely positive. What is passed over, even treated with silence, was his true attitude towards politics and the historic events in Europe until 1945, which had changed the world. Here and there, his "sympathies toward the Spanish dictator Francisco Franco" are criticized. But these possible dark spots on Dalí's white vest have never been put to rest, nor were adequately explained.

As at the beginning of 1930s the political situation became dangerous due to the communist threat to Europe by Josef Stalin against his adversaries Adolf Hitler (Germany) , Benito Mussolini (Italy) and Franco (Spain), Dalí and his wife Gala moved away from this threatening situation. They both travelled in 1934 for the first time to USA. Pablo Picasso, who symphatized with the Communists, gave Dalí the money for the journey, as was later reported. From 1939 to 1948 Dalí lived in the United States. After his return, good relations developed between the artist and the dictator Franco. As an example of the possibilities due to good relations with the politician, Dalí reported in 1974 to a private circle of friends: "As the Spanish fleet begun many years ago to do military maneuvers in the gulf of Cadaques, I complained in a telephone call with Caudillo Franco ("The Leader") about the accompanying noise and disturbances. Shortly thereafter, a miracle happened quite unexpectedly. There was quiet all around, the ships had left." 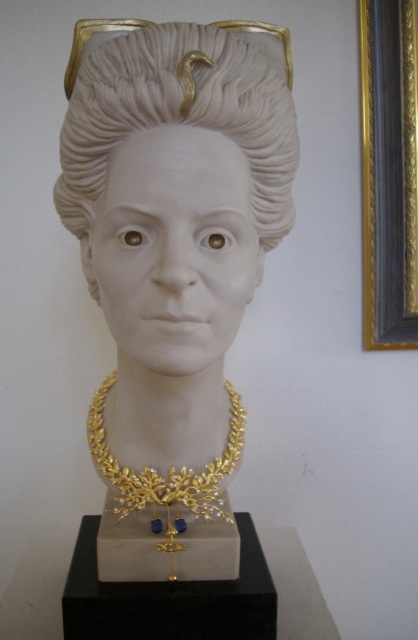 Gala Dalí, the only wife of the artist. She died before him. The portrait-bust by Karolin Donst. The masterful work is decorated with a necklace designed by Dalí. On top of her hair one can recognize the famous bow designed by Coco Chanel. The portrait belongs to the collection of the European Art Foundation Germany ( www.europaeische-kultur-stiftung.org )

Dalí and the group of Surrealists

The French writer André Breton is the most significant theoretician of Surrealism. He was an admirer and friend of Dalí, but who eventually became one of his critics. In the surrealist magazine "Minotaure", edited by Breton, Dalí published in 1933 the article "About the edible beauty, about the Art Nouveau Architecture". The article ended with the proclamation "Beauty will be edible, or will not be at all."

But in 1934 it came to tensions within the surrealist group, oriented toward the Communists, in their relations toward Dalí. The quarrel escalated due to Dalí's painting "The Enigma of William Tell". It showed a kneeling Lenin without pants with a large worker's cap and a monstrous right buttock. Wilhelm Tell , according to Dalí's own admission, represents Dalí's father as a cannibal, and reveals his disturbed relationship to him. The small child on his arm is Salvador, the basket at the feet of Tell contains the tiny child that represents Gala, who is threatened by being crushed.

André Breton, in a letter dated January 23, 1934, accused Dalí of the following: antihumanism, defending the new and irrational phenomen of Adolf Hitler, his admiration of academic painting as compared to the modern painting style, the late defense of fatherly authority and family values and concerning the painting, ultraconscious painting and pursuing success.

In a reply letter, Dalí denied all these accusations. To the main accusation point of fascism, Dalí pointed out regarding his paintings": I am neither actually nor even a symphatizer of Hitler."

In spite of all this, it came to the expulsion of Dalí from the group of Surrealists around Breton, who did not want to give up the leadership of the group. A surrealist "general assembly" that Breton called together for February 5, 1934 at his apartment, decided that "Dalí has made himself repeatedly guilty of counterrevolutionary actions, leading to the admiration of Hitler's fascism. And the signatories suggested, in spite of his declaration of January 25th, to expell him from the circle of Surrealists for being a fascist element, and to fight against him with all means." The conclusion was signed by nine members: Victor Brauner, André Breton, Max Ernst, Herold, Hugnet, Meret Oppenheim, Peret, Yves Tanguy and Caillos. Only Pierre Yoyotte expressed his understanding of Dalí's position. These accusations were on the other hand critizcized by Dalí's friends as a reactions of envy toward Dalí's artistic success.

Still, Dalí continued to successfully participate in exhibitions of the group. Breton finally realized that they could not give up this magnet attracting the public. The accusations that he was a follower of fascism and Adolf Hitler, Dalí finally adressed in his autobiography: "They demanded [ ... ] from me that I should finally decide to be a Stalinist or Hitlerist. No! [ ... ] I will remain until death what I have always been, Dalí and only Dalí! I believed neither in the Communist revolution, nor in the National Socialist revolution."

The only thing that interests me ...

From today's point of view, this is to be said: No doubt, Dalí belongs to the most successful artists of the 20th century. His loyal publisher, Captain Peter Moore from Great Britain, has significantly contributed to his fame by his publicity work. As a giant of the arts, Dalí liked to move in the company of the beautiful, influential and successful people. That was also the case already in 1920s, as he associated in Paris with Coco Chanel. He had a high respect towards achievement and ability to create. That lead in his old age to the "Friendship of the Golden Triangle" with the sculptor of the century Arno Breker (Germany) and the painter-prince Ernst Fuchs (Austria).

In spite of all euphoria for other geniuses, Dalí made it understandable that above all, he loves himself. Thus, he had himself called "the Divine". His admirers were crazy about him. In certain time periods, his art collectors were as if possessed by a mania, when it came to acquiring his lithographs and etchings. Through the purchase of these works they rightly felt themselves to be a part of the Master's work. Because artists and their collectors belong together, like tires and a car.

Until Dalí's death it was a happy time for the surrealist artist and his collectors. "We love you", they told him again and again. And no one felt offended by the provocative sayings that had multiple meanings. Realistic was the exaggerated saying of Dalí, that is often quoted even to this day: "The only thing that interests me is money."