On Drawing Animals and Men 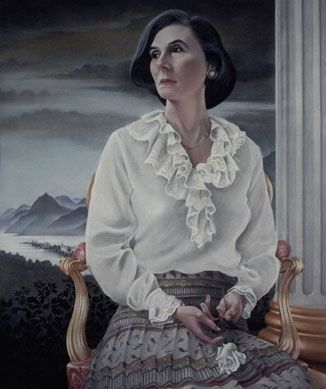 London (bpb) The British painter Hugo Haig-Thomas was asked from the internet-bulletin PROMETHES for an interview on his art. The result is the following article by the artist himself.

I grew up in Kenya, at a time when it was still a British colony, and constantly saw animals of every description. And not just animals but also birds, butterflies and other insects, reptiles and all sorts of tropical marine life. The birds of East Africa, the butterflies and moths and, of course, the tropical fish to be found on the coral reef off the East African coast displayed a brilliance and diversity of colour and form that defied imagination.

In addition to numerous dogs and cats, we also had chickens, a goat (white but called Sooty!), mice, an owl, a duck, mongooses, a monkey, a bush baby, tortoises, snakes, geckos, even a half tame iguana.

I was very curious about the behaviour of insects and spiders and other 'creepy-crawlies' and would keep them in jars and glass cases to study their behaviour. Sometimes I would paint them which required a close examination of them through a magnifying glass. I remember finding in a clover flower a small praying mantis that, with its pink and white colouring and tiny 'petals' attached to its body, looked exactly like a the flower where it would sit motionless and wait for any unsuspecting and unfortunate insect that approached in the expectation of a drink of clover nectar.

I was also intrigued by the wide variety of birds and painted those whose colours I found especially pleasing. I did not paint humans except as small figures in a landscape. I found animals far more interesting than humans and it was to them rather than people that I turned when I felt in the mood to draw.

I came to England when I was 17 in order to complete my education. After attending university, I joined Her Majesty's Diplomatic Service and my first posting was to the Lebanon to learn Arabic at the British Foreign Office's Arabic language school (known throughout the Middle East as the British spy school because some of Britain's top spies studied there). The school was situated in the mountain village of Shemlan, high above Beirut. We should have been there for 1_ years but the Lebanese civil war had started just before our arrival and, after a few months, we were evacuated back to England. However, I managed to paint some Lebanese spiders and pretty Persian cyclamens that grew among the rocks that lined the terraced olive groves. 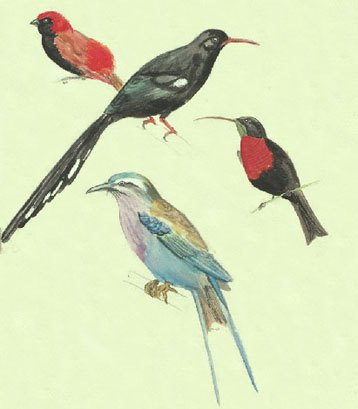 My first proper posting was to the British Embassy in Sana'a, North Yemen. Now, most people think of the Yemen as a flat and arid country with very little vegetation. In fact, the opposite is the case. A narrow coastal plain borders the Red Sea but this soon gives away to steep mountains that rise higher and higher towards the East. Eventually the ranges flatten out into a high-lying inter-montane plain which is dotted with occasional hills and mountains. This is where the capital, Sana'a, lies. Continuing eastwards the land does indeed merge into the vast Arabian dessert which is known, appropriately, as the Empty Quarter. The rain-bearing monsoon winds which traverse the Indian Ocean, bringing seasonal rain to central Africa and the Indian subcontinent, also clip the Yemen. The clouds are forced up by the mountains and release their rain onto the inter-montane plains and the mountains slopes where the water runs down and floods the wadis that bisect the coastal plains. Apart from providing irrigation for a wide range of crops throughout most of the Yemen, including coffee which, in days gone by, was exported from the ancient port of Mocha, hence 'Mocha coffee', the wet climate and diverse terrain have enabled an abundance of plant life to flourish and the Yemen is considered by botanists to possess one of the richest flora in the world.

Soon after I arrived in Sana'a, I met another Englishman called John Wood who had already been in the Yemen for three years, collecting plant samples from every part of the country and making notes of the species he found and their habitats. I accompanied John on one or two of his expeditions and then agreed to illustrate what later became the definite flora of the Yemen. (A Handbook of the Yemen Flora' by John Wood and Hugo Haig-Thomas, published by the Royal Botanic Gardens, Kew, in 1996).

My first inclination was to the paint the brightest and most spectacular plants but John would disdainfully tell me that these were botanically uninteresting or, worse, merely introductions, that is to say plants that were not native to the Yemen but introductions. In the end I painted the plants that John wanted me to paint and consoled myself with the thought that, though they might look rather dull, they were botanically important and had never been painted before.

I also tried to paint some of the beautiful traditional Yemeni buildings which were usually very tall and decorated with a white filigree (an arabesque) of plasterwork near the top but this proved to be more of a penance than a pleasure. No sooner had I established myself with my paints and pad than I would be surrounded by a cluster of small boys who asked endless questions. When they had tired of plaguing me with these, they found other ways to torment me, like tugging at my clothes or pouring sand onto my hat or tipping over my water and eventually, their greatest delight of all, throwing stones at me, starting with tiny pebbles and then casting stones of increasing size until I was forced to quit. I never became fond of Yemeni children.

A later posting brought me to Copenhagen. There I joined an art group, thinking the discipline of a course would be good for me. The first two or three sessions were fairly tame. Objects were set before us which we were required to paint as still lifes. Then one day, as we were preparing to paint whatever object our teacher chose, he gave a sign to one of the students, or at least I had thought she was a student, whereupon she pulled of all her clothes, climbed up onto the table and adopted a classical pose. My jaw dropped open. I knew the Danes were very broadminded but I hadn't realised they were this broadminded. Looking to see the reaction of the other students and seeing them all busily drawing away, I suddenly realised this was no student standing before us but an artists' model so I grabbed my pencil and began likewise to draw.

I quickly discovered a fascination in drawing the human form, something I had never attempted before. And then one day the model failed to turn up. "You'll just have to draw me" said our corpulent, bearded teacher but mercifully he did not disrobe. We were to draw only his head and shoulders. I then discovered that I had a knack at obtaining a good likeness to the sitter and from then on I have concentrated on drawing the human figure and portraits.

In painting portraits, I like to do these in the 'grand manner' which imbues the sitter with a certain 'presence' and timelessness. Portrait painters I particularly admire are John Singer Sergeant, Sir Thomas Lawrence and Philip de Laszlo. All these artists flattered the sitter without in the least detracting from a good likeness. I also greatly admire the painter, Winterhalter, for his rendering of rich materials like satin, lace, moiré, damask and shot silk. The rendering of the white evening dress spangled with silver stars and overlaid with tulle in his brilliant portrait of the Empress Elisabeth of Austria is a fine example.

Recently I have been asked to paint portraits of horses and dogs and so I have come full circle, painting animals again. But it is still drawing and painting the human form, whether for a portrait or a life study, that I find the most satisfying. It has been said that, if you can draw a human being, you can draw anything - including animals!