Games of the XXIX Olympiad. Logo for the Olympics 2008 in Beijing. One World, One Dream. The "Dancing Beijing" emblem, depicting a Chinese seal inscribed with the character "Jing" (ãû, from the name of the host city) in the form of a dancing figure.

New York / Beijing (bpb) The first Olympic Games in China will be celebrated from August 8 to August 24, 2008. These 2008 Summer Olympics, officially known as the "Games of the XXIX Olympiad" will bring high reputation to this communist country. For China it is not only an international sport event, but also a great political opportunity to present the country to the world as the leading nation in Asia. No doubt: economically, China is present in all Western countries by its production of all kind of goods.

The Chinese government has promoted the games to highlight China's emergence on the world stage, amid concerns about environmental issues, the invasion and occupation of Tibet and human rights. Nevertheless, the former IOC president Juan A. Samaranch has said that the Beijing games will be "the best in Olympic history. "

The Grand Opening ceremony will be held at 08:08:08 pm at the Beijing National Stadium in Beijing, People's Republic of China. Some events will be held outside Beijing, namely football (soccer) in Qinhuangdao, Shanghai, Shenyang and Tianjin), equestrian competitions in Hong Kong and sailing in Quingdao.

Memories go back to the 1936 Olympics held in Germany, opened by the "Fuehrer" Adolf Hitler. This spectacular event was used by the Nazis to introduce their politics for a new epoch. The Games were perfectly organized, the equipment and accommodation for the sportsmen and women of all continents were the best in the Olympic history. The French delegation greeted Adolf Hitler and the crowed at the Olympia Stadium with the "Deutsche Gruss" (German Salute) with the right arm raised up.

After World War II, the 1936 Olympics were criticized as Nazi propaganda. But all the following Olympic Games attempted to make the arrangements still better than the National Socialist Germany of Hitler had done. And now also the Chinese will use its chance to try also.

In 1936, when Art and Fine Art was an Olympic discipline, the Sculptor Arno Breker won the Silver Medal for his larger-than-life bronze "The Decathlete". The jury had fist in mind to honor Breker with the Gold Medal. But Adolf Hitler wished that the gold medal should be given to an Italian sculptor to increase the number of Gold Medals for Italy and his political partner, the ruler Benito Mussolini. 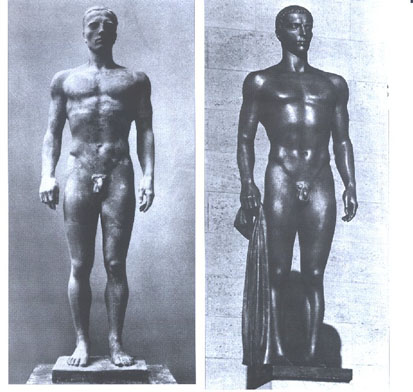 'Decathlete with Scarf' (right) at the Olympia Stadium in Berlin. The sculptor Arno Breker got for this fine bronze in 1936 the Olympic Silver Medal. On the left: 'Decathlete', another version of the sculpture, seen at the www.museum-arno-breker.org in Germany.

The Olympic games were awarded to Beijing after an exhaustive ballot of the International Olympic Committee (IOC) already on July 13, 2001. The official logo of the games "Dancing Beijing", features a stylized calligraphic character jing (meaning capital), referencing the host city. The mascots of Beijing 2008 are the five Fuwa (Good luck dolls), each representing one color of the Olympic rings. The Olympic slogan, 'One World, One Dream' calls upon the world to unite in the Olympic spirit. Hundreds of athletes will compete in 302 events in 28 sports.

While no state has indicated a willingness to boycott the 2008 games, some groups are initiating independent campaigns to do so. Other notable groups have called for protests. It is reported that Chinese intelligence services were monitoring the activities of foreigners suspected of plotting demonstrations during the Olympics. In addition, the Chinese intelligence is also monitoring possible terrorism-related activities and anti-American demonstrations.

Pro-Tibetan Independence groups, such as 'Students for a Free Tibet', have initiated a campaign to protest the Beijing 2008 Summer Olympics. The group plans to protest for Tibetan independence and objects to the Chinese government's use of the Tibetan antelope (chiru) as one of its five mascots. The Tibetan People's Movement has also demanded representation of Tibet with its own national flag. The Hollywood actor Richard Gere in his position as the Chairman of the International Campaign for Tibet called for the boycott of the Games to put pressure on China to make Tibet independent.